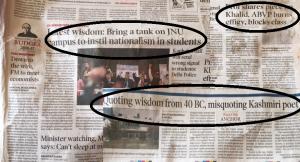 Indian Express of February 25, 2016 is a collector’s item. It’s imaginative, creative and like all such things it takes great liberty in dispensing with facts.

It’s imaginative for it gives a screaming full-page bottom-spread headline: “Quoting wisdom from 40 BC, misquoting Kashmiri poet (see the image),” even though there was no misquote from the person in question, Mr Venkaiah Naidu, Union Urban Development Minister. (More on it later).

It’s creative for it picks an exhortation for nationalism from ex-serviceman into a misleading headline: “Latest Wisdom: Bring a tank on JNU campus to instil nationalism in students.” (More on it later).

It’s factually wrong for it it splashes a three-decker headline: “Prof. shares piece on Khalid, ABVP burns effigy, blocks class” even as there is no mention in the report how ABVP “blocked” any student or students from attending one or any class (More on it later).

There is also the lead headline: “Smriti shines the light of treason” which could make a professor of English opt for a new paper roll in his toilet. But when agenda is an issue, language is a minor indiscretion.

All these are front-page headlines. None of them is in single column. Indeed, if there is any story other than concerning JNU row on front page, it’s a single column four paragraphs on front page. The newspaper didn’t have space for rail budget due next day; the water crisis which has left the Capital parched or even the jat agitation where casualty is 28 by now.

What chance then there is for you to read about the unfortunate plane crash in Nepal which killed all 23 passengers aboard? The newspaper in its wisdom apparently believes that a “babu” unable to sleep at night because of worrying “mahaul”: (“Minister watching, Minority panel official says: Can’t sleep at night, mahaul worrying”) is worthy of a four-column display. Or that a retired octogenarian Supreme Court judge’s opinion on “sedition” is worth a second lead story.

All this concerned the Page One or Front Page. Let’s now move on to other pages:

Page 4:  By far the most neutral page in that just about half the page is on JNU affair.  Things possibly are looking up.

Page 5:  Darkness again. The entire page is devoted to JNU

Page 6: Not a single JNU story. Possibly the agenda is exhausted after all.

Page 7: Not a chance. The Jat agitation is blamed on—you guessed it right—JNU. This story takes up more than half the page.

Page 8: Again a page where you find JNU, along with Rohith’s death, filling up all corners.

Page 9: It’s again JNU and students all over.

Page 10: The entire page is advertisements and it apparently has broken the spell.

You can’t be serious that there is no JNU representation in the hollowed edit-oped spread (Page14-15).

In case, by now, you are wondering whether I am mistaking any JNU Express newspaper with our “Journalism of Courage,” I can only disappoint you.  It is indeed your revered newspaper. I can assure you though that you would only find business, arts and sports in their designated pages. There is no Mahesh Bhatt vowing the make his next movie on JNU affair or Indian team donating their entire cash prize from yesterday’s win over Bangladesh to Umar Khaled in solidarity (Oh my god, I might have just given them an idea!).

There is a saying: If your head is in the sand, your butt is in the air.

But let’s return to the unfinished more-on-it-later theme which I have mentioned at the start of the column.

Quoting wisdom from 40 BC, misquoting Kashmiri poet: The story begin with scarcely concealed contempt for Smriti Irani for having invoked a 40 BC (they call it BCE now, you silly, unless you feel all your readers are Christians) quote to justify something in 2016.

(Ms Irani: you said you didn’t want to quote any Hindu sage. But quote you might anyone, you would still be up for ridicule).

But our real thrust is “Misquoting Kashmiri poet.” For the life of me, I couldn’t see how Naidu has misquoted this poet. The news item itself says that Naidu mistook it for a criticism of Modi government.

So the newspaper doesn’t see any difference between “misquote” and “mistook.” Quote comes with quotation marks. Mistook is a matter of interpretation. To replace one with another is mischievous.

Ironically, the newspaper itself misquotes on just the story above this one.  It quotes a disgruntled minority commission additional secretary for saying “situation in the country is not allowing him to sleep peacefully,” even though newspaper admits that the official “reportedly” said it. The reporter’s source must be more than impeccable for a reported comment he has deemed fit to put in quotes.

Latest wisdom:  Bring a tank on JNU campus to instill nationalism in students:  The story says a delegation of ex-servicemen met the JNU vice-chancellor and suggested ways to have a memorial on martyred soldiers inside the campus. Among the ways to make it happen, the university is considering a wall of fame, showcasing a military tank or artillery…”

The import of this statement is laudatory. Still the newspaper’s headline makes it sound as if live tanks would roll down inside the JNU campus (a la Tiananmen Square in China in 1989).

The newspaper also buries in the end a reaction to US envoy Richard Verma’s comment on the “freedom of speech” about which you read in a post by me yesterday. “(We) Challenge Verma to allow celebration of Osama (bin Laden) in any university in the US,,.”

The story doesn’t have any mention of which classes were disrupted. It just mentions that students protested outside the sociology department. So, how and which class was “blocked ?”

It’s such an in-your-face Indian Express of today that the readers must brace themselves for more of it in days, months and years to come. (God helps the rail budge tomorrow). If it is not Dadri killing or “intolerance debate” or Aamir Khan’s concern or JNU, it would be something else it would pick up to raise the hackles on communalism and intolerance under the Modi government.

We would be watching. We would urge the newspaper to be its own conscience and live up to its reputation for “journalism of courage.”