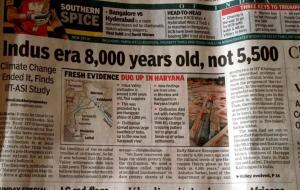 “Decolonisation of our minds could only begin when we start to consider that our history might be what the others did not write. “ —  R. C. Majumdar

Times of India (May 29, 2016) puts as lead a story—“Indus era 8,000 years old and not 5,500”– which I hardly find any mention in other mainline newspapers of the day. This omission is worth a reminder to our readers that our media is disconnected with our past and worse, wants Indians to be blissfully unaware of it as well.

Indus Valley Civlization is a seminal moment of our heritage which has successfully been subverted by the Western propaganda. While its accomplishments are without dispute, the Western narrative would have us believe that Vedas, Upnishads, Sanskrit language etc were the gifts of the invading foreign Aryan people who destroyed the Indus Valley Civilization around 1500 BC and brought their own texts, chants and prayers. All those sages, mendicants and ascetics of our imagination are but imports from our western borders. Worse, these “Aryans” drove the real Indians, the Dravidians, to the south. This was a clever method to create the North-South faultline along which India could be broken up at some point in future.

In short, India’s very culture is shown to be a gift of the invading “Aryans,” a borrowed legacy, hardly indigenous. It sure has prevented Indians from taking pride in their past, unsure of roots, awkward in their cultural assuredness.

The Times of India report conclusively proves that Indus Valley Civilization “died” out due to climate change. So the invading Aryan theorists eat your heart out. It’s worth reminding that in 2011, the American Journal of Human Genetics published the findings of a three-year-long research which proved that Indians have had the same genetic construct for the last 60,000 years. India’s foremost geneticist, Lalji Singh added: “The Aryan-Dravidian classification was nothing but a misinformation campaign.”

If this genetic make-up is not evidence enough to bunk the Aryan-Dravidian divide theorists, it could be buttressed with some critical points.

(a)The names in South, such as Jayalalitha and Karunanidhi, are Sanskrit names;

(b)The only region of India where ancient Vedic teachings are still preserved are in Dravidian Kerala;

(c)The largest Hindu temples are in south; the deities—Shiva, Vishnu, Devi and Ganesha—are the same as in North; Sanskrit verses chanted in these temples are the same.

(d)The great Vedantic teachers over the last 1500 years have come from the south: Shankara of Advaita Vedanta, Ramanuja of Visishtadvaita Vedanta and Madhva of the Dvaita Vedanta

(e)The great shrines of the Char Dhams in the north were renovated by Shankara, the great vedantic guru of Kerala. The Badrinath temple is still run by high priests from certain Kerala families

Some have raised the issue of skin colour to show the divide between fair-skinned Aryans and dark Dravidians. But then many north Indians are dark too. Cases in India—Brahmin, Kshatriya, Vaishya and Shudra were defined by occupation and not by ethnicity. India’s ancient texts do not propound racial theories.

Indus Valley Civilization is a remarkable testimony of ancient India’s glorious past. Its cities were free of encroachments, of broad roads, public and private spaces were defined, sanitation and rain-harvesting was widely practiced. As French born indologist Michel Danino has written: the Indus civilization was “largely free from warfare or man-made destruction.” A few Indus valley seals show kings in postures of yogic contemplation, “a rare interweave of the spiritual and the worldly,” as Danino said.

As D.K. Chakrabarti, an archeological professor of Cambridge has asked: “If the Harappan religious beliefs should not be view through the lens of later days Hindus, with which lens should it be viewed?”