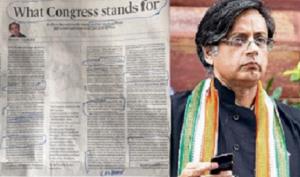 Shashi Tharoor’s edit piece in Indian Express on Saturday reminded me of my probation days in journalism with the Times of India in the 80s. My editor would look at my typed report, run circles in red every second line and send the paper flying towards the dustbin: “What the hell do you want to say?”

Chuckling, I set about circling Tharoor’s piece (see image), and literally ran out of ink. The man is as confused as his party, touching every base and sticking to none. “Jaana-tha-Japan-Pahunch-Gaye-Cheen-Samajh-Gaye-Naa” kind of delirium. A piece as bald as palm of my hand. Let’s stick to a few specific ink-circles, and not all, for I can’t afford to bore and lose you, my readers.

“Congress’ core belief…inclusive growth, social justice, abolition of poverty, protection of minorities, women, dalits and adivasis”:  Inclusive growth, social justice, abolition of poverty? Are you joking Mr Tharoor? Anyone earning above Rs 33 is not poor is how Congress removed poor and poverty.  Six worst communal riots happened under UPA and you call it protection of minorities. Women? Ask Shah Bano. And remember how you had to apologize for making fun of our own Miss World 2017?  Dalits? That’s why Bhimrao Ramji Ambedkar could get Bharat Ratna only in 1990 and that too not under Congress’ regime. Further, why your heart didn’t beat for a murdered Dalit youth leader found hanging by tree in Bengal? Was it because he worked for BJP? Adivasis? Then how did Maoists and Naxalites proliferate in India?

“Congress is political embodiment of India’s pluralism…preservation of secularism”: Your kind of equality under “secularism” doesn’t extend to Hindus and their problems. “Secularism” ought to be equality; not appeasement of minorities. The world “secular” too is an insertion in the Constitution by your leader Indira Gandhi after suspending the Parliament and slapping the “Emergency” on the nation in the 70s. Secularism is nothing but a cloaked dagger by Congress to keep it plunged in India’s heart.

“We too share Hinduism, albeit an inclusive version of the faith, rather than a bigoted one”: Oh really? May we ask you Mr Tharoor where’s your reaction on 24 BJP/RSS workers killed in Karnataka under Congress rule? Where’s Congress’ concern for Hindu lives as they are butchered in West Bengal and Kerala? Show me one tweet where you have offered condolence to Hindu lives lost? Congress standing by Hinduism almost sounds like an abuse.

“(Congress must) Help citizens in interactions with the police…”:  Now that could only happen if both citizens and police trust you with your intentions. I don’t know how policemen feel after Rahul Gandhi stormed a police station and scolded a policeman in uniform. As for citizens, they still speculate about an unfortunate death in a Delhi five-star hotel as you would recall. Where’s credibility of Congress and its leaders with the citizens of this country?

From housing to transport to potholes-on-roads to drinking water to education to healthcare to public parks to sanitation to waste management, Tharoor leaves little for imagination and a lot for mockery in his piece. Empty rhetoric, typical of Congress, the sound of an empty biscuit tin. Mr Tharoor, irony has died a million deaths in this juvenile piece of yours.