Is Indian media hand in gloves with Arvind Kejriwal? 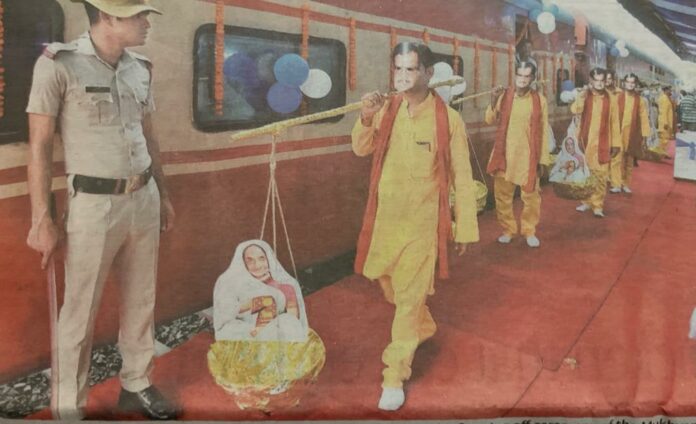 Since our newspapers don’t ask a few simple questions to Delhi chief minister Arvind Kejriwal, could we the readers pose a few and then judge if the two could be acting in concert? Accomplices hidden in plain sight?

Indian Express is gushing today how effusive are 1000 pilgrims in praise of their CM for “sponsoring” a trip to Amritsar under the Mukhyamantri Tirth Yatra Yojana (Chief Minister’s Pilgrimage Plan); the second one is planned for Delhi-Vaishno Devi-Jammu route on July 20-24. The massive lead story on “The City” page also has a three-column photo, bettered only by a four-column image in The Hindu. These newspapers of course haven’t written a single line in a fortnight on the silence of Kejriwal since a 100-year-old Durga Temple was vandalized in the very Capital which mandated for his party. Couldn’t they see this man is protecting Muslim votebank on one hand and pandering to Hindu votes with the other? Anyone communal please?

(See this classic image with the piece, courtesy The Hindu. Red carpet welcome at the railway platform, images of “Kejriwal” (mask) carrying elders like Shravan Kumar did to his parents in a basket on a pilgrimage).

In the wake of 2019 Lok Sabha disaster where AAP won only one seat, a panicky Kejriwal mooted free rides to Delhi women on metro and buses. Our newspapers, page after page, had full-page advertisements on one side and screaming reports and interviews on the other, lauding the move. The bubble was first pricked by Minister of Housing and Urban Affairs (Hardeep Puri) and then by everyone’s metro man (E. Sreedharan). Kejri had apparently announced the scheme even without submitting the proposal to its partner, the Union government!

Without as much as batting an eyelid, Kejriwal’s revised pitch restricted itself to free ride for women in only Delhi buses before it too was deflated: But sir, what’s to your promise of CCTVs in buses to help women’s security? This litany of lies were exposed by government ministers/officials but elicited not a single comment from our newspapers.

AAP is gung-ho about what it has done to improve schools and education in the Capital. No newspaper has questioned: But sir what’s happened to your election manifesto of hundreds of schools in the Capital? How many have been built?

Have the newspapers questioned: Kejri sir, it’s alright you were making new friends with Lallu Yadav, Chandrababu Naidu; Akhilesh Yadav and Mamata Banerjee to save “freedom” and “democracy” but what do we make out of your tattered credentials as a credible friend when Prashant Bhushan, Yogendra Yadav, Ashutosh, Ashish Khaitan, Shazia Ilmi, CD Gopinath, Kumar Vishwas, Medha Patkar etc parted ways? We are not even talking of Anna Hazare.

Are you the same Kejriwal who once dumped his government because the people didn’t want an association with Congress and, now, was seen begging for an alliance for the 2019 Polls? The same man whose crusade against the “corrupt” ended in apologies to Gadkaris and Jaitleys? The same man who didn’t want the perks of VVIPs and is now deep into it?

Have our newspapers questioned: When your friends are distrustful of you what makes you think the nation would trust you? Isn’t it evident in results of assembly elections in Punjab, Haryana, Goa where a majority of your candidates lost deposits? Shouldn’t you be sent to a desolate island for such wholesome betrayal of people who gave Delhi on a plate to your AAP within two years of its formation?

But no, our newspapers are gushing. Readers can’t see the “deep state” which nurtures both but the telltale evidence of Kejriwal’s “dole” to newspapers in the form of government advertisements—around Rs 1000 crores on publicity in five years—is in plain sight. It has fallen foul of CAG but our newspapers are deaf to the uproar.

AAP had taken hold of everyone’s imagination because it catered to primarily urban voters who were disenchanted with the chicanery of political parties. It was seen as creating a parallel political paradigm. Parallel democracy, if you may. We now know better that it was a ruse to fuel the personal ambition of one man. But read our newspapers and you would get no sniff of such betrayal of masses.