Is Trinamool sinking? Even Congress & Left are not keen on its offer 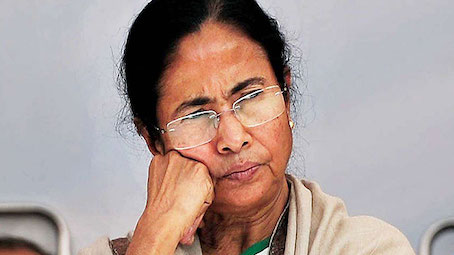 Trinamool Congress (TMC) it seems has shown its achilles heels by asking  Congress and Left parties to come to its support—the forces it had termed “negligible” only recently.

For a party which won 211 out of 294 seats in the last assembly polls in West Bengal, seeking out two parties which are hanging by the proverbial thread in the state, could only mean one thing: TMC is afraid of its existence after the assembly elections due this April-May.

“If the Left Front and the Congress are genuinely anti-BJP, they should rally behind Mamata Banerjee…” said senior TMC MP, Saugata Roy.  Hours after he had said so, both Congress and Left parties, to add insult to injury, refused the offer.

“We are not interested in aligning with the TMC. Why is the TMC now interested in an alliance with us after poaching our MLAs over the last 10 years,” questioned Congress state chief Adhir Ranjan Chowdhury.

CPI-M leader Sujan Chakraborty wondered why the TMC was trying to woo the Left parties after branding them as “negligible” political force in the state.

TMC supremo Mamata Banerjee had floated the part in 1999 after breaking away from the Congress.

In 2016 assembly polls, Left and Congress together had won 76 seats though in the Lok Sabha polls last year, Left had drawn a blank and Congress managed to wrest two seats.

Bengal BJP president Dilip Ghosh lost little time in gauging the wind: “They (TMC) are just trying to gather everyone as they know their defeat is near.”

BJP MP from Hoogly, Locket Chatterjee chimed in: “Saugata Roy is speaking as if he doesn’t trust his own party. He knows that TMC is going to lose and that is why he is calling everyone to come together. BJP will fight alone and will form the government.”

Union home minister Amit Shah, in his visit to the state in November, had said BJP would win 200 seats in the forthcoming polls.

While the BJP has slammed the ruling party for the political violence and the issue of law and order in the state, the ruling party has retaliated back vowing to never allow outsiders to take control of Bengal.

Another instance of TMC, apparently having lost their marble, was the ruckus they have caused by claiming that prime minister Narendra Modi has had a bigger poster than the national icon, Swami Vivekananda. TMC has said the saffron parties continue to insult Bengalis. They had expressed outrage when Amit Shah’s photo was put in the same frame as Swami Vivekananda’s. A few days ago, it had slammed BJP chief JP Nadda over 15th century saint, Chaitanya Mahaprabhu. In not too distant memory ws TMC going berserk on Ishwar Chandra Vidyasagar statute which was vandalised ahead of Shah’s visit.

TMC feels cornered now that Asaduddin Owaisi intends to field his party AIMIM in the Bengal assembly polls. Now the head of West Bengal Imam Association, Mohammad Yahya, has appealed to the people not to vote for Owaisi. “He is not a Godfather that people would follow what he says,” said Yahya.

Owaisi has joined forces with a prominent Muslim leader Abbas Siddiqui for the upcoming polls. The two are in the process of deciding on seat-sharing. Siddiqui, a Pirzada (religious leader) from Futura Sharif, has been vocal against the TMC government.