Israel and Hamas cease fire after 11-days of confrontation 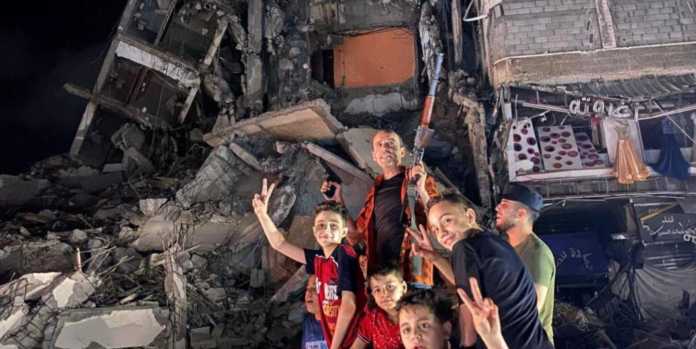 A cease-fire between Israel and Hamas took effect Thursday evening after both parties agreed to halt an 11-day military confrontation that saw over 200 Palestinians and 12 Israelis killed in the worst fighting in the region in years.

Israeli Prime Minister Benjamin Netanyahu announced the truce, brokered by Egyptian officials after his cabinet unanimously voted in favour of a “mutual and unconditional” ceasefire.

Soon after the cease-fire took place, Hamas, the Islamist militant group that rules Gaza returned to the streets for celebration. People went out of their homes, shouting “Allahu Akbar” or whistling from balconies. Several men even fired rifles, burnt firecrackers, jammed the roads, honked the horns, and waved flags from the window. Throughout Gaza, postponed Eid al-Fitr meals were held instead.

Meanwhile, Taher Al-Nono, the media advisor of Hamas chief Ismail Haniyeh, said, “The Palestinian resistance will abide by this agreement as long as the Occupation (Israel) does the same. Hamas spokesperson Abu Ubaida added, “With the help of God, we were able to humiliate the enemy, its fragile entity, and it’s savage army.”

Responding to this, Israel Defense Forces Spokesperson Hidai Zilberman said the military had passed a message to Hamas that if it conducted a large attack, the IDF would retaliate with a massive airstrike on dozens of targets.

The fighting erupted on May 10, when Hamas militants in Gaza fired long-range rockets toward Jerusalem. They launched over 4,000 rockets into Israel throughout the fighting. The Israel Defence Forces also carried out airstrikes on targets in Gaza in response to continued attacks by Hamas against Israel. At least 230 Palestinians, including 65 children were killed, and 12 Israelis, including two children