It’s just not defiance; it’s an act of subversion by WhatsApp 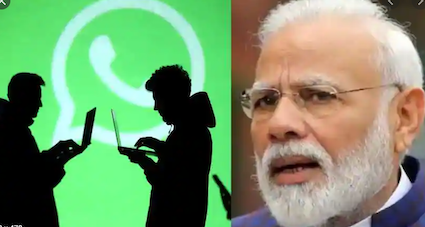 Let’s say I ask you which individual do you think is the biggest threat to India as we know it.

And let’s define threat as (a) one who instigates riots: (b) one who helps naxalites and terrorists to endanger our nation’s sovereignty: (c) one who threatens a starlet with gang-rape if she ever sets foot in a particular city.

Let’s also imagine instances of such threats: (a) Delhi Riots, let’s say, were planned and not spontaneous; (b) Naxalites in Chattisgarh or infiltrators in Bengal ambush our soldiers: (c) a Kangana Ranaut is told she would be violated if she ever dares set foot in Mumbai.

If you pause on these three specific threats, you would’ve a specific individual taking shape in mind who could cause (a) Delhi riots; (b) Ambush soldiers; (c) Violate Kangana Ranaut.

Let’s say to trigger such a response, these individuals, through the help of WhatsApp fine-tunes with his/her henchmen to bring their nefarious designs to a fruition.

And now let’s say the Indian government, while investigating, asks WhatsApp who started it all. And the WhatsApp shoots back that its’ end-to-end encryption doesn’t entertain such requests: It amounts to censor, curb on freedom of speech, violates fundamental rights, hurts privacy.

Let me frame it differently. It’s post October 31, 1984. Delhi is burning after India’s prime minister Indira Gandhi is killed. We all know in our hearts that it was instigated. That same modus-operandi across the Capital suggests it were co-ordinated. And that workers of a political party could’ve been in lockstep.

And now the Indian government requests WhatsApp to help it trace the perpetrators. It pleads: It would be a help to law and order agencies; It would help judiciary punish the culprits.

If it were today, who do you think you would stand with? Indian government or WhatsApp?

I say so because most young, certainly most Urban youth, are agitated at the new media laws by the Indian government. They think its’ violation of freedom, of expression and its’ antithesis to democracy.

Let me address this section of youth, and all those who stand for absolute freedom—with all the rights and no responsibility. An individual who must prevail over the common good.

It’s no brainer that individual should always give way to common good. That’s the essence of all societies, all governments. That’s why societies empower and elect governments who they think are most likely to ensure it.

Individuals are part of a society and not above or beyond its scope. And that in case of such a conflict between an individual’s right and a society’s common good, there’s judiciary to take a call in one or other’s favour.

A dispassionate, neutral observer would find fault with WhatsApp on these specific positions:

The relevant Indian ministry has cited examples of several countries which are contemplating far more stringent measures than are being introduced by the Indian government.

This is what the governments of the United States, the UK, Australia, New Zealand and Canada concluded in July 2019: “Tech companies should include mechanisms in the design of their encrypted products and services whereby governments, acting with appropriate legal authority can gain access to data in a readable and usable format.”

One hopes Indian judiciary is able to redeem itself on the matter. They should deal with it, 24×7 if required, and nip this mischief in the bud. It’s losing its moral authority by burying its head in the sand on the matter of “super-spreader” farmers’ protest, which makes pompous, headline-inducing comments for morning’s newspapers appear so shallow and hollow.

For its’ just not defiance. It’s an act of subversion.