Jains, Hindus are leaving homes in Gujarat due to changing demography 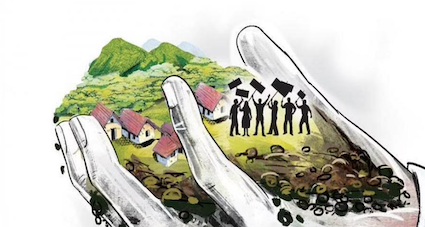 The Gujarat Assembly, in 2020, brought significant amendments in the Disturbed Areas Act, 1991.

Under the Disturbed Areas Act, a district Collector can notify a particular area of a city or town as a “disturbed area” and property sale or transfer in that area will require an additional permission from the collector’s office affirming free consent.

It is important to understand that Disturbed Areas Act plays a significant role as there is a constant effort from some anti-social elements who were selling and buying properties by threatening people or luring them with higher prices.

The concept of mixed population is not uncommon in Gujarat but a recent report from Opindia talks about how demographic change in Surat and Bharuch is forcing Jains and Hindus to leave their own house and Muslims.

A letter from a Jain Sadhvi who stayed in Surat’s Gopipura brought it to the table how Muslim residents of her area has turned a traditional Jain locatity in Muslim-dominated place.

In her 2014 letter, addressed to then Gujarat chief minister Anandiben Patel, President, Prime Minister Narendra Modi, Sadhvi pointed out the deliberate ‘pushing out’ of the Jain population from Gopipura where she lived.

Sadhvi said the Muslim are posing a ‘serious threat’ to their religious security. Narrating one incident, she stated how one Mehboob of her locality slaughtered one of his goats right at the time when they were sitting down for lunch and another  during their Brahma Muhrat at 4 am.

She added in her letter that Muslim kids would run behind the stray dogs and beat them up with belts and would often leave waste of onion and garlic peels outside their homes which is extremely painful for Jains.

For practising Jains, non-violence is considered to be an important value.

She also mentioned one incident where during Bakri Eid in 2013, Muslim kids deliberately took goats through her Upashray to tease her.

Sadhvi in her letter has also alleged that there is a grave risk that Jain residents could be ‘pushed out’ of their areas as Muslims usually purchase the house by offering 2-3 lakhs more than the usual amount.

One such video even got viral on social media where a Muslim woman in burkha was seen knocking on doors and asking the resident if the house he is living in was up for sale when the resident denied of having put his house up for sale.

She said while there is no physical harassment, there are other ways due to which Jains are forced to leave this place.

“We are Jains. Neighbours cook nonvegetarian food and the smell is so overpowering that we cannot go inside the kitchen after 6 PM. Some three years back, one of the girls who lived here was harassed. The family left the house within a week. Six months back, my own daughter faced harassment outside the temple. We are tired of this. There is a school right across this apartment, Shri Ratnasagar School. Now, most of the students studying there are Muslims,” she added in distress.

Condition of Bharuch is no different from Surat.

The Hindu residents of Soni Faliya area of Bharuch have revealed how Muslims have purchased the houses surrounding the temple and later they started opposing the evening Aartis in the temple.

The local residents alleged that Muslim families told them that Bhajan is haram and hence must be stopped.

A Gujarati local news channel even reported that Soni Faliyo residents were getting calls and messages from unknown numbers from outside of country where the person, identifying himself as a Muslim, is pressurising them to vacate their homes. He is also offering double the asking price for their houses at Rs 1 crore.

The residents have also raised concerns that this might be a planned conspiracy to displace Hindus and they fear that there are high chances that various anti-social activities, including forced religious conversions are being carried out.

Residents stated that they had already  written to administration under Disturbed Areas Act raising concerns over change in demography and illegal transfer of property to Muslim owners but no action has been taken yet.

While religious conversions and love jihad make headlines in mainstream media, the demographic change has often got ignored.

And mind it, there’s a fat chance that your main stream media will tell you that it applies equally for all religions and would present it as “a tool to discriminate against Muslims.”