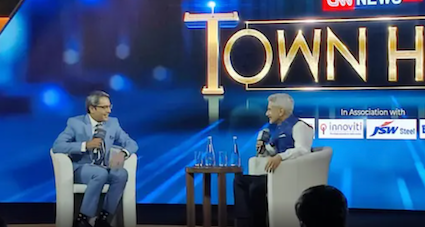 (Media has blanked an important conversation India’s foreign minister Dr S. Jaishankar had with News 18 at Town Hall on Saturday. Below is a summary. The video could be seen at the end of the piece—NewsBred)

India’s External Affairs Minister (EAM) S Jaishankar is not in a mood to let our rivals go scott-free.  He is constantly reminding the world that China is expansionist, simultaneously, EAM is also telling the US to take responsibility for its past deeds.

At a town hall organised by News18, S Jaishankar was in full swing. He took the opportunity to express India’s position on multitudes of the issue concerning our strategic interests. He tackled the China issue by re-emphasizing that under his and PM Modi’s watch, China would never be able to expand the Line of Actual Control (LAC) in its favour.

Jaishankar apprised the audience that both India and China have been negotiating after Galwan Valley confrontation. Jaishankar stated that because China tried to illegally occupy Indian territory, our soldiers also advanced towards them. Ultimately, the points of friction increased, which both countries have not been able to fully solve after 15 rounds of negotiations.

Declaring that China won’t be allowed to alter the LAC, Jaishankar said “There are areas where they pulled back, we pulled back. Remember, both of us are very much in advance of what our pre-April positions were. Has it all been done? No. Have we made substantial solutions? Actually, yes. It is hard work. It is very patient work, but we are very clear on one point, which is, we will not allow any unilateral attempt by China to change the status quo or alter the LAC.”

Jaishankar stressed that the long duration and increased rounds of negotiations are not going to deter India from thrusting its own rights on the negotiation table.

Bone of contention between India and China

Currently, both countries are involved in a bitter border dispute. India is constantly nudging China to respect the Line of Actual Control (LAC), while China continues to push back against it. The border dispute reached its peak when China tried to take advantage of the Covid-19 pandemic by launching an offensive on the border in May 2020.

After the Galwan valley attack, a total of 15 rounds of negotiations have taken place between both countries. After the third round of meetings, both India and China had agreed to resolve the conflict in Galwan valley, Patrolling points 15(PP15), and PP17A. China did oblige to disengage from Galwan Valley but it has still not fulfilled its disengagement obligations in PP15 and PP17A.

Jaishankar on the US and its history

Meanwhile, Jaishankar did not forget to remind other powers of their diminished status as well. When it came to Uncle Sam, Jaishankar stated that inspite of US half-heartedly trying to get close to us, its chequered history with Pakistan can’t be forgotten. Fairly and squarely holding the USA responsible for India’s trouble with Pakistan, Jaishankar said  “A lot of our problems with Pakistan are directly attributable to the support which the United States gave to Pakistan,”

The statement is a direct counter to moral posturing by US on terrorism issue. From the day it was born, Pakistan has been trying to snatch Kashmir from India. But it never had money or muscle to do so. It is the USA which initially provided money to the terrorist nation. By the end of 80s, in the name of anti-Soviet crusade, it provided Pakistan with muscles as well. Pakistan was the launch pad and modern-day terrorists were US backed fighters against Soviet Russia. Soon, Pakistan sniffed an opportunity and transferred these Mujahideens to Kashmir. At the same time, it played victim card to the USA by claiming that it itself is a victim of terrorism. In this way, it kept getting money for training terrorists and sending them to create ruckus in India.

But, over the last two decades, times have changed. India has registered a massive economic uptick, due to which it is moving towards Aatmanirbharta in its own defence expenditure as well as technology. Modi government has thrown Pakistan out of Kashmir negotiations and has maintained that it is our own internal matter. India took stands on various other issues which were totally antithetical to that of USA. Increased trade with Russia is one of them.

Russia-India relations did not make an iota of difference in QUAD. Apprising the same, EAM Jaishankar said “But today, there is a US that is able to take a long view, which is actually able to say “India has a different history with Russia” and we have to take that into account”

India’s history with Russia is different from that of America, Japan or Australia and everybody in the Quad does not have an identical position on everything, “Had it been the case, we would have expected everybody to have the same stand on Pakistan as ours,” he remarked.

Dr Jaishankar wondered that if it was indeed about identical positions, he could ask the other three members of the Quad why their positions on Pakistan are not exactly the same as India’s.

“We are today in a pragmatic, get-on-with-it world where you look for people with whom at a very basic level your interests match, and we have a common agenda. For example, the Quad is Indo-Pacific centered. It does not extrapolate into something else.

“It is very hard to overcome 200 years of colonialism, it’s a paradox, we often think of the psychological or the cultural attraction of colonialism but we do not think of the enormous damage to our societal fabric, our economy,” said Dr Jaishankar.