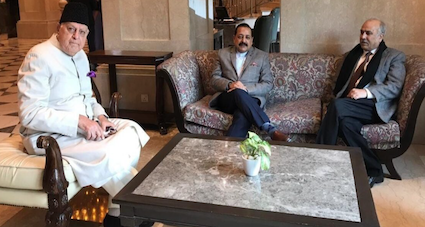 Disappointing is the first word that came to mind on hearing that the Delimitation Commission has indicated that it is going to propose 43 seats for the Jammu region, and 47 for Kashmir. On Monday, the commission headed by Justice (retired) Ranjana Prakash proposed this division. The commission shared its first draft in Delhi with associate members drawn from the National Conference and the BJP. The members who participated in the meeting were NC chief Farooq Abdullah, Hasnain Masoodi, Jitendra Singh (MoS in PMO) and Jugal Kishore Sharma, all Lok Sabha MPs from Jammu and Kashmir.

As expected, Singh termed the commission draft as “objective’’ but almost the entire spectrum of Kashmir-based parties termed it as unacceptable. Those who outright rejected the report included NC second in command Omar Abdullah, PDP chief Mehbooba Mufti, People’s Conference chief Sajad Lone and Apni Party chief Altaf Bukhari. Interestingly, newly appointed UT Congress chief Raman Bhalla said that increasing the number of seats by six in Jammu is no enough. He asserted that this was less than just, meaning thereby that the number of seats in Jammu should have gone up.

In the 87-member legislative assembly before August 5, 2019, the Kashmir region had 46 seats while the Jammu region had only 37 seats. Another four seats were in the Ladakh region which has now become a separate Union Territory (UT) after it was hived off from erstwhile state of Jammu and Kashmir. At the time of scrapping of Article 35-A and whittling down Article 370, a fresh delimitation of assembly seats was also ordered. The Central government had raised the number of assembly seats from 83 to 90. It had also asked that Scheduled Tribes (STs) be given reservation in the political sphere as they were denied this right given to them by the Constitution of India so far.

In the days to come, one can expect that political temperature will rise significantly even as mercury plunges all across J&K. Some days ago, the PDP had said that it had no faith in the commission appointed by the BJP government. The NC had said it would accept the commission recommendations only if these were unbiased and based on data of 2011 census according to which the population of Kashmir valley is 15 lakh more as compared to the Jammu region. However, it has been repeatedly alleged by several Jammu-based leaders that the census figures were grossly fudged. They had also said that delimitation should be undertaken only after a fresh census. They had also suggested that Central rule should continue in J&K till such time as a new census was completed.

In the days to come, more details from the commission regarding its draft may emerge and shed some light on the process or variables of Representation of People’s Act, 1951, it followed while giving its recommendations. In RPA, 1951, population, means of communication, terrain, connectivity and like considerations are some of the variables which are taken into account when delimiting the constituencies.

Going by the first draft of the Delimitation Commission, it doesn’t look likely that even after allocating six more seats to the Jammu region, the gross disparities with Kashmir will get addressed. This is clear from a perusal of the preceding few paragraphs.