July the Fourth and US’ fear bugle 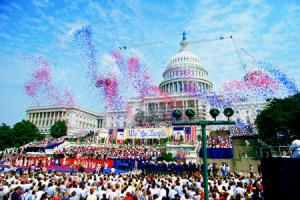 The US citizens celebrated  independence day on July 4 amidst high alerts of a security breach and terrorist attacks issued by the Barrack Obama government.

The US Air Force cancelled its planned celebration at British airbase RAF Feltwell because of “local threat assessments.” In recent weeks, a large number of “potential ISIS (!) plotters” have been arrested who, interestingly, are Americans only.

All this charade has been orchestrated despite the officials conceding there is zero evidence of any actual plot on the Fourth of July.

Experts claim that ISIS would find it far more easy to blow up Pentagon assets closer home in Iraq, in the outskirts of Ramadi, as they are just a stone’s throw away from a major, ISIS-controlled city.

Earlier, the US military had announced it would hold a massive military drill throughout nine states in an operation, entitled Jade Helm from July 15-September 15. This alarming exercise across the entire American southwest with include the US Army’s Green Berets, US Marines Special Ops Command, US Navy Seals and Force Special Ops Command.

The exercise again is not in preparation of a Russia-backed invasion. It is a mock run for imposing undeclared martial law towards which the US government is preparing its citizens.

The growing civil unrest, as displayed recently in Baltimore and St. Louis, has led the US government to strike fears amongst its citizens. Surveys suggest that 80 percent of US population doesn’t trust either the government or its mainstream media.

But it all falls into a pattern as US governments have consistently raised the “terrorism-threat” bogey since the cataclysmic 9/11 attacks in New York.

On October 26, 2001, then President Bush had signed the USA Patriot Act into law in indecent haste. President Barack Obama renewed it in 2011. It all militarized US police dramatically.  The weapons handed over to police included machine guns, armoured personnel carriers, aircraft, night-vision equipment etc. At least $34 billion of grants have been handed out to local police. The effect has been arrests and more arrests, to the point that US today holds a quarter of world’s prisoners.

Experts John Mueller and Mark G. Stewart estimate that expenditure on domestic homeland security has increased to more than $1 trillion since 9/11 even though the annual risk of dying in a domestic terrorist attack is about 1 in 3.5 million. They reckon that for this expenditure to be cost-effective, “they would have had to deter, prevent, foil or protect against 333 very large attacks that would otherwise have been successful every year!”

World War II hero and 34th president of the US Dwight D. Eisenhower, as commander-in-chief of armed forces, famously targetted the Military-Industrial Complex in his farewell speech on January 17, 1961: “We must never let the weight (of military-industrial structure) endanger our liberties of democratic processes. We should take nothing for granted. Only an alert and knowledgeable citizenry can compel the proper meshing of the huge industrial and military machinery of defense with our peaceful methods and goals, so that security and liberty may prosper together.”

Eisenhower spoke thus in 1953 early on in his two-term presidency: “Every gun that is made, every warship launched, every rocket fired, signifies, in the final sense a theft from those who hunger and are not fed, those who are cold and are not clothed. It is spending the sweat of its labourers, the genius of its scientists, the hopes of its children.”