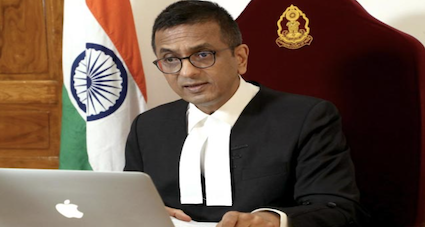 Justice DY Chandrachud is “insensitive to majority Hindu sentiments,” is the word from a very distinguished Indian elite, Kanwal Sibal.

Sibal, a Padma Shree, whose father Hira Lall Sibal was a Padma Bhushan, said so in a tweet after Justice Chandrachud, in a public function, took the grandstand that recent removal of a Karwa Chauth ad of a same-sex couple was due to “public intolerance.”

Justice Chandrachud was speaking on “empowerment of women through legal awareness,” which is rather embarrassing, on a separate note, since between 1950-2015, only six women became Supreme Court judges out of a total 229 judges appointed.

But Sibal’s comments led to an avalanche of reactions on Social Media where those who’ve kept an eye on Justice Chandrachud pointing out several instances as proof of his bias against the Hindus in his judgements.

Speaking at a Harvard Law Event, on the Sabrimala judgement, Justice Chandrachud said there is “nothing in the religious sphere which is private.” The famous lawyer-activist J Sai Deepak countered this position with a tweet: “And that would apply to coerced conversions as well?Interesting. Because when d issue of coerced conversions is raised, we are told ” religion is a private matter”.

J Sai Deepak and Justice Chandrachud have crossed swords more than one in courtrooms, most spectacularly during the hearings on a show of Sudarshan News, “Love Jihad.” Sai Deepak objected to the Supreme Court taking up the case, claiming that Supreme Court had no jurisdiction on the matter. His argument contended if any statute or the Constitution permits Courts to step into the shoes of the State which should take a call on broadcast of such content.

Justice Chandrachud, in a lecture, once said that the Supreme Court should play the role of a “counter-majoritarian institution”, and it was its duty to protect socio-economic minorities.

Distinguished journalist R Jagannathan countered this position in a piece: “The term majoritarian is not relevant to the Indian context where Hindus are not organized under one church or agreed on one set of fundamental laws.” Besides, he felt that this flew in the face of fundamental position of equality before law.

“This is no different from Manmohan Singh saying that the first right on State resources must be with the minorities,” wrote Jagannathan.

During the turbulent days of Second Wave of Covid-19 this summer, Justice Chandrachud asked the central government to produce “complete” data of its purchase history of three Covid-19 vaccines. “The data should clarify the dates of all procurement orders placed by the centra government for all three vaccines, the quality of vaccines or ordered on each date, and the projection date of supply.”

This was seen in certain quarters as judicial overreach. Courts can’t get involved in vaccine procurement as they won’t be answerable to the people on such issues. This is job of experts and policy-makers.

Jagannathan again: “In this judicial durbar, the executive will stand in the corner like an errant schoolboy and possibly be asked to do sit-ups and held accountable for its sins while all kind of agenda-driven lawyers try to punch holes in policies. The bench will play judge, jury and executioner.”

“There is now very little separating a constitutional court from becoming a free-for-all Kangaroo court.”

Most of us remember the Pehlu Khan tragedy when he was lynched, suspected as a cow-smuggler, in Alwar but the accused were acquitted for lack of evidence. Social Media is quoting Justice Chandrachud’s subsequent remarks which seemingly presumed the Police for not having done its job properly.

“I tell you this is one of the great torments of being a judge because you’ve to decide on basis of evidence, as it stands and then you find that police investigation has been so woefully inadequate that it’s going to result in acquittal.”

R. Jagannathan is not cutting any corners: “I could have said that liberalism has lit its own funeral pyre and not dug its grave, but this virulent form of liberalism that Justice Chandrachud seems to represent is a purely Western Abrahamic import. Yes, it has dug its own grave.”

When farmers’ protest and West Bengal post-poll violence doesn’t get even a slap on the wrist, when firecrackers alone and no other factor, including beef consumption, is pulled up for virulent pollution, when Lakhimpur Kheri is Suo Motto but not Palghar Sadhus, when Kanwaris and Bakrid are seen through two different prisms etc, the honourable Courts begin to lose its sheen and moral authority.

As it is, there is a swell of anger on the crores of cases pending in our Courts. The appointment of judges is opaque—nobody knows how Collegium system works and what’s the criteria of their appointment. Judges don’t bother to declare their assets which was a 1997 resolution, though only voluntary.

I close with the words of R Jagannathan: “Justice Chandrachud, who will be Chief Justice of India next year, is taking the judiciary in the wrong direction…Justice Chandrachud, if he continues in this vein, will leave a large gash across the Constitution when he leaves the bench in 2024.”