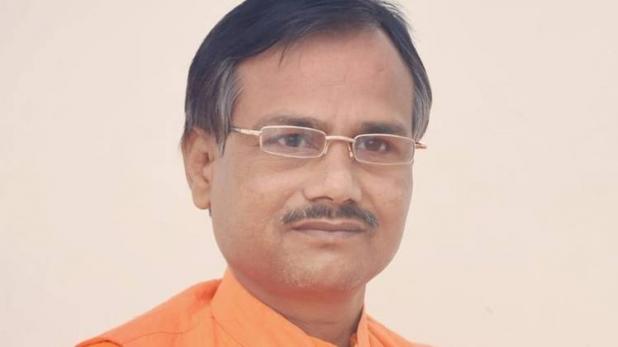 Hindu Samaj leader Kamlesh Tiwari was brutally murdered in Lucknow on Friday which has the potential to snowball into a major polarizing incident in coming days.

Tiwari, who spent months in jail for commenting on Prophet Mohammad in response to Azam Khan (Samajwadi Party) remarks that all RSS leaders are gay, was to lead a demonstration in Kolkata on October 22 against state chief minister Mamata Banerjee for her failure to protect Hindus and BJP workers who are being brutally murdered in Bengal.

Tiwari was at his home when his murderers entered unobstructed in saffron garb, pretended as if to offer him sweets but pulled out a knife from the packet and stabbed her repeatedly, including sliting his throat.

The gruesome murder has evoked strong reaction on the social media and accused the Yogi Adityanath government in Uttar Pradesh for not protecting the life of Hindu leader despite open threats to his life by self-styled Muslim leaders who promised crores of rupees to those who would behead his head. Worse, Kamlesh Tiwari had gone public, claiming that he was receiving threat on his life from Islamic State (IS) terrorists.

Why he was not given z+ security @HMOIndia @myogiadityanath.. blood is on your hands pic.twitter.com/5nxfpdF1nJ

At the time of the incident, one guard of Kamlesh Tiwari was missing while another was asleep as the murderers made an unobstructed entry and killed him in broad daylight at his Khurshidbagh residence in the state capital.

Kamlesh was a zealot of Hindu cause but often lamented that it was a lonely battle on his part as fellow Hindus wouldn’t even spare a dime in the name of religion while Muslims were being funded in millions by organized forces in India and abroad. One of his recent Facebook post makes for poignant reading.

#KamleshTiwari last posts â˜¹ï¸â˜¹ï¸â˜¹ï¸ Read it sadly. The injuries he was inflicted so gruesome, we need not even second guess the community of assailants. Only they are capable of being so inhuman pic.twitter.com/9K5x6Rzxbb

The social media is outraged by the gruesome murder but the response in Lutyens Media, as expected, is tepid. The common thread running on social media is lack of protection or provision for those who take up the Hindu cause, be it from the government or resourceful Hindus. It’s often a lonely trek and those who become strident in countering the Left-Liberals or Islamic forces are easily picked and finished off.

Social media is citing various such incidents where unprotected Hindu voices have been silenced in last few years. A parallel with Swami Shradanand of Arya Samaj is also drawn who was murdered in a similar cold-blooded manner in 1926.