Kangana calls out Sonia: ‘History will judge your silence’ 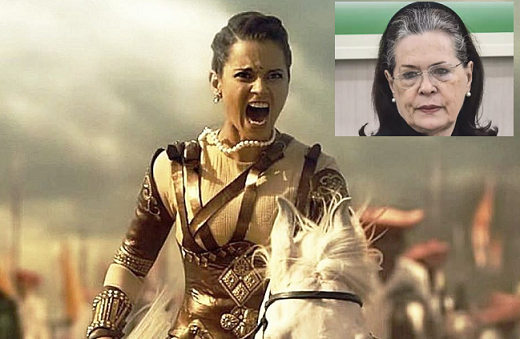 While the clash between her and Shiv Sena doesn’t seem to be ending anytime soon, Kangana Ranaut has now trained her guns at Sonia Gandhi, the Congress interim president, who is a coalition partner in the government in Maharashtra.

She called out Mrs. Gandhi for not taking any action against their allies for demolishing her office and not taking a stand for a woman and said, “history will judge your silence and indifference”.

In one of her tweets, she wrote,

“Dear respected honorable Congress president Sonia Gandhi Ji, being a woman aren’t you anguished by the treatment I am given by your government in Maharashtra? Can you not request your government to uphold the principles of the constitution given to us by Dr. Ambedkar (BR Ambedkar),”

The 33-years-old actress said that Mrs. Gandhi is well aware of the struggles of women but still she chooses to remain silent.

“History will judge your silence and indifference when your government is harassing women and ensuring a total mockery of law and order. I hope you will intervene,” she added further.

In another swipe, Kangana accused Shiv Sena of compromising the ideology of Bal Thackeray, who never wanted to form a coalition government with Congress.

“Great Bala Saheb Thakeray one of my most favourite icons, his biggest fear was someday Shiv Sena will do Gutbandhan and become a Congress. I want to know what is his conscious feeling today looking at the condition of his party? … “The ideology on which Shri Bala Saheb Thackeray had built Shiv Sena, today they have sold that ideology for power and have become Sonia Sena from Shiv Sena. Don’t call the goons who broke my house in my absence a civic body. Don’t insult the constitution in this manner,” she tweeted.

On Wednesday, a team of BMC has demolished the actress’s office for alleged unauthorized extensions after which the war between these two has only grown fiercer.