Kanwar Yatra is one thing, Bakra-Eid in Kerala is another in SC’s eyes 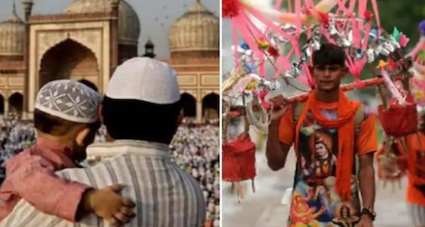 The Supreme court, which promptly took the suo motu cognisance against Uttar Pradesh government for allowing ‘Kanwar Yatra’ amidst the Covid-19 pandemic, has now deferred the hearing in the plea filed against the decision of the Kerala government to relax Covid lockdown norms for Bakra-Eid.

Instead, the apex court asked the Kerala government to file its response during the day and said it would take up the matter for hearing as the first item on Tuesday.

Pinarayi Vijayan-led communist government had decided to relax its restrictions for three days to celebrate the festival, which falls on July 21.

Senior advocate Vikas Singh pointed out that the impugned decision was taken even after Prime Minister Narendra Modi cautioned everyone against increasing numbers.

He further argued that while Kerala has an official positivity rate of 10.96%, Uttar Pradesh has recorded 0.02%, and yet the relaxation has been granted for celebrations.

He said even local areas where Covid positivity rate has been above 15 per cent will see a waiving of restrictions on Monday. He appealed the SC to pass orders quashing the relaxation granted by the Kerala government ahead of Bakra Eid.

It is interesting to note it is the same bench headed by Justice RF Nariman that categorically denied all the permissions to allow the Kanwar Yatra in Uttar Pradesh amid the Covid-19 pandemic, but today they didn’t give any order despite state showing an alarming increase in Covid case every day.

Meanwhile, the Indian Medical Association (IMA) on Sunday asked the Kerala government not to make way for mass gatherings in the state on the occasion of Bakrid. The body warned that if the state does not take back the relaxations, it will move the Supreme Court.