Kashmir in UN: India tells Turkey to stop ‘interfering’ in its internal matters 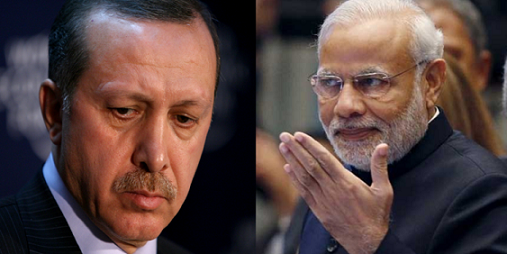 The Turkish president called Kashmir “conflict” a “burning issue” in his address during the UNGA debate and commented, “Steps were taken following the abolition of the special status of Jammu-Kashmir further complicated the problem”

He added, “We are in favour of solving this issue through dialogue within the framework of the United Nations resolutions, especially in line with the expectations of the people of Kashmir”.

India’s Permanent Representative to the United Nations, TS Tirumurti slammed Turkey’s president remarks and categorically told them to “learn to respect the sovereignty of other nations”

“We have seen remarks by the President of Turkey on Indian UT of Jammu & Kashmir…They constitute gross interference in India’s internal affairs and are completely unacceptable. Turkey should learn to respect the sovereignty of other nations and reflect on its policies more deeply.”

Erdogan had raised this issue in 2019 as well, where he had accused the international community of not devoting enough attention to Kashmir.

Last week, India had also slammed Pakistan, Turkish, and the Organization of Islamic Cooperation (OIC) for their intervention in India’s internal affairs.

India considers the Kashmir dispute as something to be settled bilaterally with Pakistan, and it is also widely accepted by the international community including the United States President Donald Trump, who had also tried but failed to intervene in the dispute.