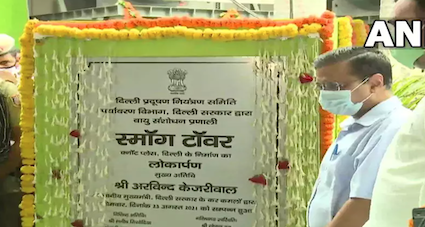 Indian Express today has a screaming four-column headline: “Proud to be city with most CCTVs, better than London and New York: Kejriwal”. Earlier this week, Delhi’s chief minister was thumping himself on his back for installing a giant Smog Tower in the middle of Capital’s heart: Connaught Place.

Now how comprehensive is the CCTV coverage? It’s only in its first phase (1.4 lakh CCTVs) across 67 of the 70 constituencies. Which are the three seats left out? Vishwas Nagar, Mustafabad and Gandhi Nagar all of which are or have been associated with the BJP MLAs (Om Prakash Sharma, Jagdish Pradhan and Anil Bajpai).

Now how effective is this CCTV coverage, so called for the safety of Delhi’s women? According to National Crimes Records Bureau (NCRB), crime against women is actually on the rise in the Capital. Surveillance doesn’t translate into safety and the money spent goes down the drain or in some very deep pockets.

We were told through the Standard Operating Protocol (SOP) on CCTVs that feed would be made available to RWA representatives, local police, area DCP and PWD. But when questioned in the Delhi assembly recently, the truth tumbled out that the CCTV footage would only be made available after a go-ahead from areas MLAs.

Now these CCTV cameras are also installed or being installed in more than 1,000 schools of the Capital. Facial recognition technology on minors in Government schools in the NCT of Delhi is being used. Worried on count of violation of right of privacy to minors under Article 21 of the Constitution, as well as the right to free and compulsory education under Article 21A, one Internet Freedom group, filed an RTI in December 2020.

The RTI request was transferred by the Education Department to various schools as they evaded a direct reply. Multiple schools, however, confirmed that facial recognition technology was indeed used in conjunction with CCTV cameras.

The truth of Smog Tower

Now let’s look at the giant Smog Tower. It rises more than 24 metres above the ground; uses 5,000 filters to purify the air around but only has 40 large fans at eye level. The goal is upto 1,000 cubic metres of air per second. But the truth is, it could spare our lungs only upto ONE KM! And Rs 20 crores spent for all this: How many Smog Towers and how many thousand crores do you think Delhi would need to cover its 1,484km spread?

There is enough evidence it’s a failed strategy. China tried it in Beijing and it was trashed by the experts. Such experiments in megacity are useless. China duly shifted to emission clamps and reforestation strategy.

Los Angeles too has once burnt its finger with this experiment. It too dumped the adventure soon. Why, even in Delhi a similar endeavour by Gautam Gambhir in Lajpat Nagar attracted only gawking shoppers but went nowhere.

Air-pollution is best reduced at source: in this case the stubble burning by farmers in neighbouring Punjab. Kejriwal, who has ambitions in Punjab and is eyeing the assembly polls in next few months, isn’t promising any deliverance either to citizens of Punjab or Delhi. If Delhi has so much money to spare, it could promise technology to take care of stubble-burning. It could promise Delhites a better solution to noxious, toxic pollution which descends every winter, endangering lives and most what happens is the resolve of judiciary to clamp down on burning crackers in Deepawali. Every year, the same drama, the same revolting excuses.

Now the Kejri government has given itself two years to see the efficacy of the Smog Towers. Never mind the cost or electricity usage.

But then Kejri is all spectacle and little substance. His government would’ve been better served if they had a waste-burning policy in the Capital instead of landfills. Most small manufacturers and industries in the Capital is still using dirty fuel. And despite its promise to have 25 percent of total vehicles electrified by 2024, the figure on ground is only 13 percent vehicles electrified as of now. What’s being done to integrate buses and metro trains? Or cycling infrastructure?

Delhi has crumbled despite over-running headlines in newspapers and a beaming chief minister without a hint of fog in his glasses. Maybe the citizens, who are looking for freebies in water and electricity, deserve the government it has been burdened with.