Kejri, step aside: You favouring judiciary over ‘Aam Aadmi’ could be the last straw 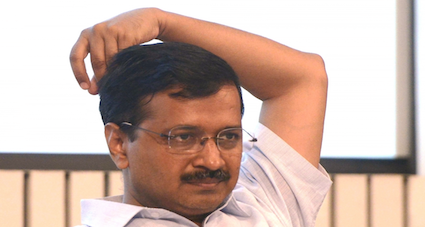 Why should anyone be surprised if people tomorrow are burning up Delhi.

Those who are losing family, without hospital beds, oxygen and ventilators, have read this morning that Capital’s five-star Ashoka Hotel would be turned into a Covid Centre to house Judges of Delhi High Court, judicial staff and their families.

We don’t know who from the Delhi High Court made this request but we surely know that Arvind Kejriwal’s AAP-government has promptly accepted the request in “public interest.”

Who would blame public if it concludes that it’s a “bribe” to stop judiciary from baring its fangs against the Delhi government under assault for its mismanagement of Covid-19 crisis.

It’s a logical corollary since the unholy nexus between Kejriwal-Media has acquired roots in public perception anyway. That Kejriwal “buys up” media with hundreds of crores spent on advertisements.

An RTI has revealed Kejriwal spent Rs 150 crores in advertisements in the first three months of this year; that his face was “advertised” 25 times in 10 hours on India Today TV channel etc.

Who would fault public if it concludes that for the Kejriwal government, “public interest” doesn’t extend to doctors, para medical staff, cops, municipal workers and volunteers helping Covid-19 patients. And this from a party which claims to be for “Aam Aadmi.”

And spare a thought for normal staff at Ashoka Hotel who would be “trained” at the drop of a hat to do room service, in-room dining etc, exposing themselves to this deadly virus. A collateral damage of a few lives, as it were.

Let me bring to readers notice the anger a Delhi hospital has vent out at Kejriwal government for its “Capital mess” in the Covid-19 nightmare in the Delhi High Court. Sample:

Above is a select outrage which a Delhi hospital (Jaipur Golden Hospital) has heaped on Kejriwal government after 20 of its patients died due to lack of oxygen only three days ago.

Now sample what one of the prime supplier of oxygen equipments to the Capital, Inox, has submitted to the Delhi High Court.

In all likelihood, if you read Times of India you won’t find these damning words in your newspaper.   Its’ headline: “Solving O2 crisis job of both Centre and Delhi govt: HC” is such a pathetic airbrush for the Kejriwal government. Look at the headline The Hindu has given: “Ashoka Hotel to be used as a Covid Health Centre”: When its not for common people but for Delhi High Court!

Such is Lutyens Media’s complicity that it didn’t dwell, and I bet most of you don’t know, that in 2016, the “chai and samosa” bill which Kejriwal and six members of his cabinet had raked up in 18 months was over a crore of rupees, as per a RTI reply.

I hope Delhi High Court withdraws its request to be “looked after” in the present Covid crisis. It’s not in “Public Interest” as the Kejriwal-government has shamelessly claimed. Neither it helps people with beds, oxygen or ventilator; nor does it help from the suspicion of “quid pro quo” gaining ground now that legal actions are being sought against the Delhi government in these very portals of judiciary. Or Supreme Court nips it in the bud.

It’s unlikely the Centre would dismiss the Kejriwal government. But if there is any shame left, Kejriwal must step aside. Nobody is at helm. People, hospitals, suppliers all are sinking at this misgovernance. We don’t want a situation where “Aam Aadmi” on street is being tear-gassed or fired at by central armed police force. Who knows even the Ashoka Hotel could require to be turned into a fortress.

Gauge people’s anger: Step aside before it’s too late.