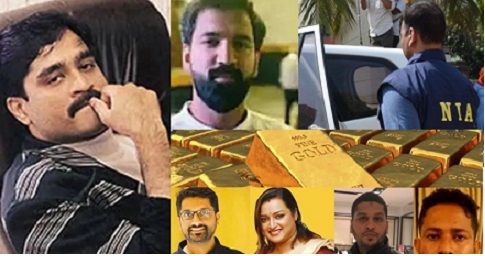 The National Investigation Agency (NIA) has submitted in the special NIA Court at Kochi in the Kerala gold smuggling case that it suspects that the accused have links to Dawood Ibrahim’s D-Company.

This would cause grave political tremors in the southern state of Kerala.

The matter had come to the surface after 30kg gold worth Rs. 14.82 crores were caught by Customs in Thiruvananthapuram early this year. It was camouflaged as a diplomatic consignment.

“The relationship of the accused in the gold smuggling case with D-company and ISIS has been established. The state government is shielding these smugglers. The CM has lost moral rights to continue. Hence, we demand that he resigns immediately,” Kerala BJP chief K Surendran said.

“It’s very shocking that the main culprit in gold smuggling case has connections with Dawood Ibrahim. It is one of the biggest crimes that happened in Kerala. Unfortunately, the state government was supporting the culprits. The NIA will unearth details of this crime,” Congress’ Ramesh Chennithala stated.

In a related development, the Kerala High Court has directed the Enforcement Directorate not to arrest M. Sivasankar, former principal secretary to Kerala CM Office till October 23.

Intelligence outputs have mentioned that the accused have links and have visited Tanzania several times where the underworld don has an extensive network.

These reports were submitted in the response to the bail petitions of the seven accused in the case.

The officials have also mentioned that gold smuggling was used for anti-India terror activities.

The agency cited the UN Security Council’s narrative summary of Dawood Ibrahim and a fact-sheet published by the US Department of Treasury that specifically mentions his business interests in Africa.

According to agency reports, one of the accused, Ramees had revealed during the interrogation that he has a business in Tanzania and had bought gold from the country and sold it in the UAE.

The NIA also told about another accused, Mohammed Ali, that he is a member of the Popular Front of India and was charge-sheeted by the police in the Kerala case where a professor’s hand had been chopped in 2010.

NIA informed the court that they had also retrieved a photo of the accused Sharafudeen holding a rifle in Tanzania.

The agency told a Special NIA Court that it had got intelligence inputs about likely use of proceeds from the gold smuggling for anti-national and terrorism-related activities.

The NIA also strongly opposed the bail applications of all the accused in the case. It argued that the detention of all accused was required for upto 180 days to conduct the investigation.