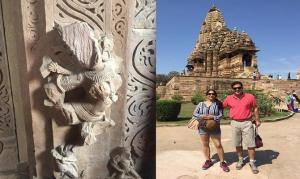 It’s easy to describe Khajuraho temples in bare facts. That the group of temples were constructed by kings of Chandela dynasty (9th-13th century) of Bundelkhand in Central India between 950-1050 AD; that out of 85 temples only 22 remain; that a spread of 20km with various water bodies is now reduced to only 6km stretch; that it was hidden from the world for nearly three centuries before an Englishman T.S.Burt rediscovered it in 1830s. And that today it is UNESCO world heritage site.

However, it’s only when you visit these group of temples celebrating Hinduism and Jainism, which American historian Will Durant admired for its’ spirit of tolerance, and are face to face, that you sink on your knees and tears start to flow, uninhibited. You are light as air. Without a form.  Reduced to the Spirit consumed by the Creator Supreme.

The sculptures are so many, spread to the last inch of the behemoth structures, yet in perfect harmony and space, depicting every aspect of life – Dharma, Artha, Kama and Moksha –which is the essence of Hinduism.  These 100s of sculptures, made of sandstone from the surrounding mountain ranges, must have been made by hundreds of skilled sculptors then carried to the site, uplifted through a corresponding mound, then interlocked in symmetry, grids and mathematical precision. There are no mortars: only mortise and tenon joints since the gravity of the stones hold it together. Such construction requires precise joints – nearly a thousand years in existence is ample proof of its perfection.

Wikipedia says: While recording the television show Lost Worlds, Alex Evans recreated a stone sculpture under 4 feet that took about 60 days to carve. Roger Hopkins and Mark Lehner also conducted experiments to quarry limestone which took 12 quarrymen 22 days to quarry about 400 tons of stone. Such an exquisite work would’ve required 100s of trained sculptors and decades of work.

The other thing which strikes you about Khajuraho is extreme vandalism it has suffered. Most of it was by Islamic invaders though during the British rule, and after, smugglers axed beautiful heads and figures and sold it in overseas markets.

There are elaborate historical evidences which show the extent of brutality of Islamic invaders. Abu Rihan-al-Biruni, the Persian historian who accompanied Mahmud of Ghazni in his raid of Chandelas’ territory in 1022 CE, mentions Khajuraho temples and the barbarity of the aggressors. In the 13th century, Delhi’s Muslim sultan Qutb-ud-Din Aibak attacked and seized the Chandela kingdom. Ibn Battuta, the Moroccan traveller, mentioned visiting Khajuraho temples “which contain idols and have been mutilated by the Moslems.” Tens of Khajuraho temples were smashed to the last stone by these fanatical barbarians.

An interesting aside is that puritan Mahatma Gandhi, in a fit of his Victorian morality, wanted to have nothing to do with Khajuraho temples because of its vivid sexual imagery. He so much as wished that vandals would wipe Khajuraho temples out of existence. It was Rabindranath Tagore who stood up for Khajuraho as one of the great heritage of India and spoke against this insanity. British too were outraged by this Hindu “decadence.”

A visit to these temples is one of life’s enriching, overwhelming experience. You marvel India’s advanced civilization when Europe was in its dark ages. It’s also a wounding experience for looking at disfigures sculptors you become acutely aware of the destruction which Islamic invaders wrought on this land. Muslim inhabitants of this land can’t be blamed for their forefathers but let there be no denial too that Islamic invaders were filled with a religious zeal to wipe out “kafirs” and convert a “Dar al-Harab” (non-Islamic zones) into “Dar al-Islam” (Islamic zones). Pretending nothing of this sort happened is insulting and not a homage to this injured civilization of ours.