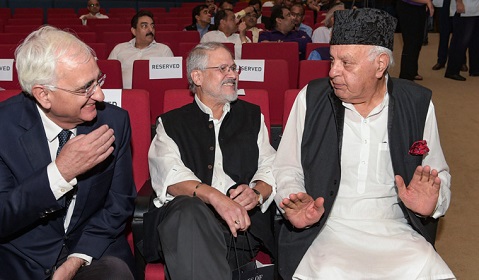 Farooq Abdullah in his recent interview with a news channel said that he hoped that Article 370 will be restored in Jammu and Kashmir with China’s help. After his statement, BJP has launched a scathing attack on Abdullah accusing him of justifying China’s expansionist mindset.

BJP spokesperson Sambit Patra has lashed out on an 82-year-old leader for a seditious statement.

“On September 24, Farooq Abdullah said that if you go to Jammu and Kashmir and ask people if they are Indians, then people will say that we are not Indians. In the same statement, he also said that it would be good if we could join China,” Patra said in a press conference.

Patra also targeted him for his softness for Pakistan and China and mentioned that it has raised a lot of questions.

Not only BJP but J&K Congress has also distanced itself from Abdullah’s statement.

“Farooq Saab is president of an old party and he can clarify whatever he said. I feel internal matters of India should be dealt with in the nation, through courts. China is not a part of our dictionary and was not a part of the Gupkar Declaration. He speaks on his own.”

Meanwhile, Central Government has assured that no leader in J&K is under house arrest, Congress leader Saifuddin Soz released a video showing that he was unable to move out of his residence and claimed policemen were forcefully whisking him away from the media. But it is The Supreme Court who has rejected the Soz wife’s plea for releasing him from detention.

Similarly, there are several leaders – including Sajid Lone who have been released from detention but are reportedly not free to move out of their residence without police.