Lancet report on Modi has wrong facts: A political agenda in a medical journal 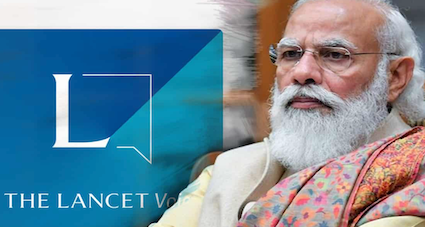 The latest report by medical journal Lancet criticising Indian prime minister Narendra Modi on the second wave of Coronavirus pandemic hurting India is factually incorrect and politically motivating which is little surprising since it’s the same journal which had criticised India on the abrogation of Article 370 in Jammu and Kashmir when the matter had nothing to do with health matters.

The Lancet quotes the Institute for Health Metrics and Evaluation (IHME) which estimates that India would have 1 million deaths from Covid-19 by August 1.

The IHME has been terribly wrong with its data. For instance, it had claimed that nearly two lakhs of people would be dead by September 1, 2020. The truth is this figure has only been touched now. On that day, September 1, 2020, India has lost 66,000 lives to Covid-19.

Even today, it has inflated claims that India has lost 734,238 lives while the actual figure is 242,362. This is three times the reported figure.

The IHME had projected a thousand Covid-19 deaths regularly in November 2020 when cases were surely dwindling.

The Lancet mentions Kumbh Mela but makes no mention of thousands of farmers squatting in protest.

The Lancet argues for a national lockdown when as many as 154 districts have no or minimal cases to report. It has not taken into account that vast majority of India is already under partial or full lockdown.

The Lancet quotes Bloomberg to criticize Modi when it’s well known that it’s owned by Michael Bloomberg who fought for the presidential candidacy for Democrats in the US presidential elections of 2020.

The magazine blames for opening up vaccination to adults over 18 years of age when in a federal structure everyone was pushing the Centre to do so. It’s a case of “Heads I win, Tails you lose.”

The article blames Centre for keeping too much control directly when the criticism was that it wasn’t allowing the States to decide for themselves what suits them best.

The biased and partisan article quotes an Al Jazeera report which claimed that the Yogi Adityanath government was threatening hospitals for flagging oxygen shortage. The source is apparently fake. The UP government, in fact, is cracking down on such fake rumours. It’s also cracking down on black-marketing.

The Lancet blames Modi for removing criticism on Twitter when the government had asked those tweets to be removed that showed photographs of funeral pyres unrelated to the current crisis.

(This article is based on a piece published in the OpIndia).