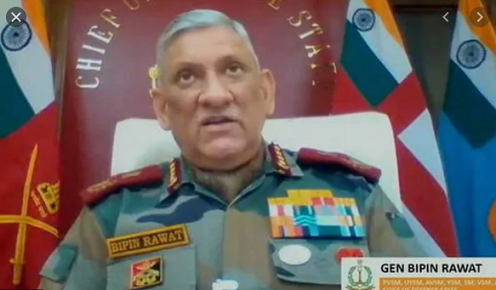 Indian military leadership has made clear it would not accept any change in the Line of Actual Control (LAC)—the very day when it’s holding a Corps Commander-level talks with China in Chushul in eastern Ladakh amidst the ongoing border standoff.

“We will not accept any shift in the Line of Actual Control,” said India’s Chief of Defence Staff Bipin Rawat, making clear that the status quo has to be restored.

The CDS didn’t hide the fact that the situation in eastern Ladakh along LAC continues to be tense following belligerent actions and transgressions by the Chinese. Chillingly, he also said this could spiral into a larger conflict.

“A full-scale conflict with China is low on probability, but border confrontations and unprovoked tactical military acts spiralling into larger conflict can’t be discounted,” he said during the Diamond Jubilee Webinar – 2020 organised by the National Defence College.

General Rawat also said the relations with Pakistan are at an all-time low.

“Unabated proxy war in J&K unleashed by Pakistan accompanied by vicious anti-India rhetoric has taken Indo-Pak ties to a new low. Surgical strikes including the Balakot strikes have sent a strong message that Pakistan no longer enjoys impunity of pushing terrorists into India under nuclear bogey,” Gen Rawat claimed at the event.

“Pakistan has continued to remain the epicentre of armed Islamic insurgency and terrorism. For three decades now, Pakistan Army and its intelligence agency ISI, which have been waging a proxy war in J&K, have now increasingly started resorting to non-kinetic means by launching vicious anti-India rhetoric on social media and propagating false communal narrative to create social disharmony within India.”

He pointed out that Pakistan had become unstable over the past few years.

“Pakistan’s current economic crisis, its inability to come out of the Financial Action Task Force (FATF) grey list, rising religious and ethnic fundamentalism, and internal power struggles will push it further into instability in the foreseeable future,” he stated.

As for India, being “atmanirbhar” (self-reliant) in modern defence equipment and weaponry is the need of the hour.

“As India grows in stature, security challenges will rise proportionately. We must move out of the constant threat of sanctions or dependency on individual nations for our military requirements and invest in building long-term indigenous capability for strategic independence and application of decisive military power to squarely meet present and emerging challenges,” the CDS stated.

“As far as defence cooperation is concerned, we understand the importance of leveraging defence diplomacy in building mutual trust and partnerships with strategically important countries. In the coming years, we will see our defence industry growing exponentially and contributing to the overall defence preparedness and deliver us state-of-art weapons and equipment fully made in India,” he added.