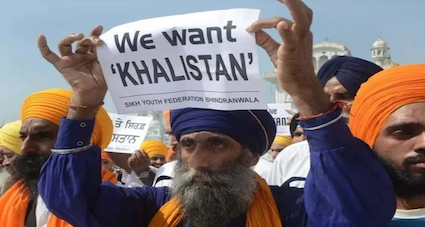 They are 58% in Punjab, much more than Hindus (38%) and in a referendum, Khalistan is approved.

To the rest of India, it would mean a loss of 2.8 crores of its population; parting with 1.53% of its geographical spread etc.

Population exchange and resultant bloodbath, as was the case 75 years ago during the Partition, we would leave out for the moment.

Now let’s see if it’s dream or a nightmare which has come to fruition for Sikhs.

As things are, an average household in Punjab earns a mere Rs 12,000 per month. It’s is as low as 19th among the 28 Indian states in terms of per capita income.

And that’s because most of the economy is MSP-based on wheat and rice and little else.

So cut this nonsense of Punjab being the bread basket of India—it once was. It no longer is.

If indeed it is, it wouldn’t have been this poor.

And industrialisation or manufacturing is a horror in plain sight.

What once were flourishing manufacturing clusters in Jalandhar, Gurdaspur, Ludhiana and Gobindgarh etc today mostly have locks on their steel doors.

In Ease of Doing Business Index, Punjab is 19th out of 28 states—let that sink in.

It’s youth, some 1.25 lakhs, mostly head for greener pastures of Canada every year which is a drain of Rs 22 lakh on an average per year on parents.

Or there are students loan which bloat the balance sheet of robbers who go by the name of bankers.

The debt probably remains unpaid till the parents have left this world and once students have greyed, either manning the counters in grocery stores abroad or adding the numbers of Khalistan enthusiasts.

And drugs? We couldn’t help but discuss it, isn’t it.

Males, some 60 per cent of them, chew tobacco and drink alcohol which is no vice as such. But opium and cannabis is rampant these days. And girls are joining the high.

The state, which is in close proximity to Golden Crescent (Afghanistan, Pakistan and Iran), is overflowing with contraband drugs.

Earlier gunny bags used to be dropped across the long border Punjab shares with Pakistan, some 553km in length.

Now, BSF is clamping on so new methods are gaining ground—from drones to turning them into tablets to wedding cards etc.

How things have come to this pass?

And that’s because a corrupt elite has ruled Punjab all these decades, hand in gloves with rich landowners, who have deluded the masses in the name of glorious Sikh past, warriors against enemies who once were Mughals and British and are now projected to be Hindus.

And, as many feel, if these corrupt rulers are also a smokescreen for Pakistan and its ISI, then heavens help the new Sikh land.

Pakistan would love Punjab to secede and be in their corner.

For one, it would severe India.

Two, Pakistan would be closer to gaining control of Punjab’s water which is a matter of life and death for them.

In due course, this Khalistan would resemble another Afghanistan where terrorists and drugs rule. Their friendly new neighbour would change colour in an instant and rule Khalistan by proxy.

And who could stop them? India is no longer with Khalistan and the new nation, as it is, would neither have farms (no MSPs) nor industrialization and present subsidies would vanish overnight.

Not just economy, even ecologically Punjab today is impoverished with degraded soil and depleted groundwater.

And should we count the cost of Aftermath? When Sikhs, living cheek by jowl in rest of India, would be endangered in the inferno of communal violence as Hindus would be in new Khalistan.

Politicians can play their games. It’s the State’s citizens who must smell the danger engulfing them and their children.

It would be downright stupid if Punjab today feels they made Modi return in disgrace from Bathinda.

The truth is Punjab has lost some Rs 42,000 crore of investment which the Indian Prime Minister was bringing to the state.

Is this the future they want for themselves? If not, don’t let the assembly polls go to waste.