Look where “we-are-delaying-peak” by Kerala is landing India in Covid-19 mess! 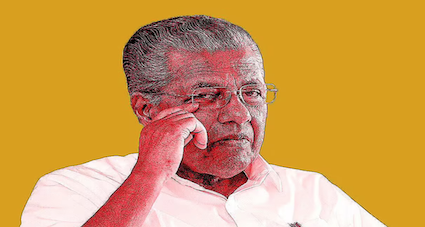 No one has taken the pain or do I particularly say the ‘Lutyens Media’ to expose Kerala even when the little state reported 31k of 46k national cases on Wednesday.

The state, however, has tried to explain away this issue through various ‘expert terms,’ but their myth-making around their ‘Kerala model’ still continues which is threatening enough to submerge the nation into Covid-19 rage again.

Look at what the state’s top ministers have said.

In November 2020 when Kerala crossed 10,000 cases per day, chief minister Pinarayi Vijayan after the daily expert committee meeting said “We could delay the spread of the disease at its peak.”

Three months later the statement remained the same, only it came from state’s former health minister K. Shailaja, who said that their strategy is to ‘delay the peak’.

Another quarter year passed when in July 2021 with 22k cases per day, Veena George, the current minister of health and welfare parroted the same lines, “Our strategy is to always drag the wave and delay the peak”

In August 2021 with almost 31k cases per day, the strategy is still the same- to delay the peak.

The dynamic nature of the pandemic calls for a dynamic strategy on the part of the government, however, the continuous increasing case shows that the state’s single strategy to “delay the peak” is bringing the nation close to the third wave.

The state accounts for less than 3 percent of the Indian population but contributes over 2/3rd of daily infections now. The percentage of people that remain vulnerable is greater than in any other state, making it far from herd immunity.

The lockdown relaxations during the Bakrid celebrations fumed up the state’s condition, making it further difficult to conclude the curve.

Indian Medical Association state secretary Dr. Gopikumar P. said Kerala is not able to flatten the curve due to a low number of testing and poor contact tracing measures.

Earlier Bharatiya Janata Party president JP Nadda also pulled up the Vijayan government for relying on antigen test when RT-PCR should be done.

The special team sent by Delhi to Kerala also mentioned how they have found that a lax containment strategy is being adopted by the Kerala government. People who are supposed to be isolated at home are moving freely in their neighborhood, fueling the virus’ spread.

The panel flagged low seroprevalence, implying that a relatively lower segment of the state’s population had contracted the virus till then, along with a significantly high number of senior citizens — all contributing to the spike.

Kerala which was basking in glory and its health minister was even hailed as “Covid slayer,” has been ignoring the Centre’s advice to shift their focus “to suppress the levels of transmission of the virus so that the chain of transmission can be controlled more effectively.”

The health secretaries in other states speak to the media, but never in Kerala. When there is a criticism, they don’t come out and explain it properly.

And there is no answer on earth to what has kept our media quiet about these findings?