‘Lord Rama not a mythical character’ 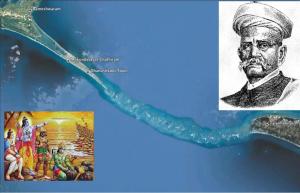 Devadatta Ramakrishna Bhandarkar died on this day—May 13—in 1950. One of India’s greatest archaeologist, Bhandarkar unearthed the entire city of Nagari in Chittorgarh district in 1915-1916. But we remember him as a man who told us that Ramayana and Mahabharata are not all fiction. Myths abound but to term the epics as make-believe would be an utter folly, according to Bhandarkar.

Three lectures of Bhandarkar In Calcutta University in 1918 were later published as a book “Lectures on the Ancient History of India.” Much is known about the Mauryan and Gupta empires but anything further back is wrapped up in a mystery. Bhandarkar’s lectures focussed on the history of India from 650 BC to 325 BC and is a seminal book on India’s past. It provides fascinating details about the life, culture and society of that forgotten era.

Bhandarkar was able to shed light on the mystery of ancient India. His lectures were path-breaking in that he showed that Ancient India was far more advanced in relation to the rest of the world. The great educationalist, Sir Ashutosh Mukherjee termed him as the “pathfinder in trackless regions of the boundless field of Indian antiquarian research.”

Bhandarkar, during his illustrious career, pinned down an important fact—that Lord Rama was not fictional. In Ramayana, Lord Rama is said to belong to Ikshvaku clan and Bhandarkar was able to quote three sources on its authenticity. Inscriptions from the third century told him about the reign of King Madhariputra Sri Virapurushadatta of the Ikshvaku family. The Buddhist texts tell us that Buddha too had belonged to Ikshvaku clan. And then there is Ramayana of course.

Bhandarkar was also able to establish the veracity of Brahim sage, Agstya. The sage has been mentioned in the Ramayana as among the first to have crossed the Vindhya mountains. It was this sage who is admitted by all Tamil grammarians as the founder of the Tamil Language. Bhandarkar also points that in Robert Caldwell’s “Grammar of the Dravidian or South Indian family of languages”, there is a mention of a hill where Agastya retired after setting up the Tamil language. The hill called Gastier (Agastya’s Hill) can still be found in the Tinnevelly district of Tamil Nadu.

In Mahabharata, and its important appendix, Hamivamsa, there is mention of a Kshatriya clan Bhoja. This clan, Bhandarkar proved, was also mentioned in Kautilya’s Arthashastra, a great work on statecraft, which preceded Niccolo Machiavelli’s, The Prince, by a good 1600 years.

The City of Ayodhya as mentioned in the epic, including Ashok Vatika in Sri Lanka and Lepakshi in Andhra Pradesh (where Jatayu was gravely injured by Ravana while trying to save Sita), have all been authenticated.

The NASA Shuttle released images of a mysterious ancient bridge between India and Sri Lanka as mentioned in the Ramayana. It has confirmed half submerged path of rocks between Rameshwaram in Tamil Nadu, through the Mannar islands and up to Northwestern coast of Sri Lanka. The evidence suggests that the bridge was manmade and the timeline of Ramayana matches the one of the bridge. Medicinal herbs in Sri Lanka, the finding of footsteps of Hanuman, have surfaced.

Bhandarkar had little doubt that Ramayana and Mahabharata acquired a mythical proportion over centuries. “However it would be a mistake to suppose that legends teach us nothing historical,” stated Bhandarkar who lived all of 74 years.