Love Jihad: The legal position in India in case you wish to marry a Muslim man 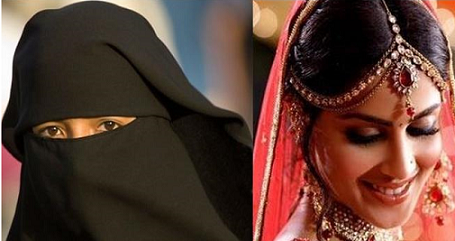 Love Jihad is in news. After the Allahabad High Court passed stricture against conversion only for the sake to get married (now it seems it has retracted its move), a number of states have gone public in considering a law against “Love Jihad”—essentially using love and the bait of marriage to convert a non-Muslim girl into Islamic faith. Uttar Pradesh, Haryana, Karnataka, Assam and Madhya Pradesh —the last named is even considering a jail of five years on its violation—have set the ball rolling.

Be as it may, and whether such law would appear good on paper but are difficult to enforce, it’s worth outlining the process and consequences for a non-Muslim girl to consider if she marries a Muslim man. Here are the top 10 questions and its answers worthy of her attention:

Question 1. What are the different ways available to a Muslim boy and a Hindu girl to get married?

Answer:  There are 3 ways through which they can marry:

Muslim Law: It’s called Nikah. But one has to be a Muslim to marry. It could only happen between Muslims. Without converting a partner has no legal standing. It’s non-reversable too. For the punishment for apostasy in Islam is death. The girl also has to change her name on every legal document.

The third option is the Hindu Marriage Act, 1955 where the Muslim boy can become Hindu and get married.

Question 2. If a girl converts to Islam, what are the laws applicable to her?

Question 3.  What are the rights under Muslim Personal Law?

Answer: Shariyat is a law that acts as a code for living that all Muslims should adhere to. It is not codified and has undefined provisions and thus lacks uniformity across several Islamic sects. It is based upon the “hukums” and “fatwas” issued by the Maulvis of different sects from time to time.

Question 5: What is Nikahnama?

Answer: Nikahnama is a binding contract, drafted by Moulvis, and a fundamental element of Islamic marriage that is often inclined towards one side-the boy’s side. It describes the rights, obligations, and clauses relating to compensation to be paid during marriage and Mehr (Mehr is the pre-determined compensation payable by the husband to the wife on divorce).

Question 6: How can a girl process divorce under Muslim Personal Law?

Question 7:  What are the consequence of a divorce on girl and children under the Muslim Law?

Answer: Muslim Women (Protection of Rights on Divorce Act), 1986, governs the law relating to maintenance and alimony for women on divorce. It is mandatory for the husband to pay alimony to the wife but only during the iddat period that is 90 days after divorce. After the iddat period, responsibility goes back to her family. In case, if there is no one in her family who can support her, the Magistrate may direct the State Wakf Board to pay maintenance.

Question 8:  What are the inheritance rules for a Muslim woman under Shariyat?

A son will receive double the share entitled to the daughter.

A Muslim woman as a mother also has the right to inherit property from the share of her children.  If children are independent and her son is a father as well, she will get 1/6th share of his property.

In case her son has no children, she would get one-third share.

Meanwhile, if a Hindu girl marries a Muslim without converting her religion, the marriage will not be considered valid and she will have no rights over her husband’s property under existing laws.  She will be only entitled to Mehr and nothing else.

But if there is any child that is born out of such marriage, he/she is entitled to claim a share from his father’s property but not the mother.

Question 9: What does Halala mean?

Answer: Islamic law gives liberty to a husband to divorce his wife by announcing Talaq three times and the divorce becomes final after the waiting period of three talaqs is over. Now if the couple wants to remarry after a talaq (be it regular or triple talaq), the wife has to marry a third person, consummate the marriage, get divorced, and remarry the original husband. This is called nikahhalala. (Triple Talaq is now banned in India).

Question 10: What would be a beneficial option for a Hindu girl if she wants to marry a Muslim?

The Special Marriage Act is the best option as it will give freedom to both of them to practice their religion.  All the liabilities and inequalities of Muslim law for women will not come into action under this.

(This is an abridged version of a piece which appeared in eSamskriti, penned by a long-standing lawyer).