Majority of Indian farmers in support of farm laws, finds a survey 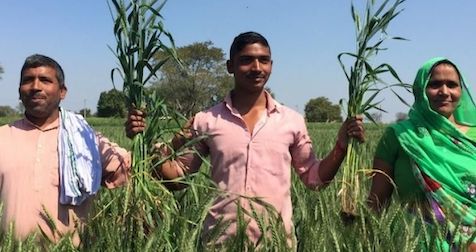 An overwhelming number of farmers in 22 States from around the country are in support of new farm laws, a new survey by News 18 Network has revealed.

With 2,400 respondents taking in the survey, 53.6 percent of them stood in favour of the new farms laws; 56.59 percent of farmers believed it was time for the farmers to call off their protest; 60.9 percent agreed that the farmers can get a better price for their produce under the Modi government-implemented new farm reform laws.

The survey also presented another interesting statistics. Respondents from highly agrarian states including Uttar Pradesh, Madhya Pradesh, Andhra Pradesh, and Telangana believed that the new farm reform laws brought by the Modi government would benefit farmers. Punjab is the only exception, where the response was a little muted, reports News18.

The support not only comes from the northern states but equally from the other part of India. While 62.90 percent of respondents from the West expressed their support, the southern states presented astonishing results with 74 percent record support.

The farm laws introduced by the central government permits farmers to trade outside the APMC regulated mandis and the survey found out that more than 70 percent of people welcomed the Modi government’s decision to give farmers the choice to sell their produce outside APMC mandis was the right. People align their support stating that the government’s decision will ultimately help farmers with more choices to sell and they would be able to get better prices.

Another key takeaway from the survey data presents that a big percentage of respondents almost 49 percent, believes that the protests were influenced by the politicians for their petty motives, and more than half (52.69 percent) believed that the protesting farmers should not insist on repeal of the farm reform laws and must come to a compromise with the government.

The survey’s findings come even as protests against the new farm laws continue in various parts of the country, particularly in Delhi. Protesting farmers on Monday began their day-long ‘relay’ hunger strike on a chilly Monday morning at all sites of protest on Delhi’s borders with Haryana and Uttar Pradesh.

The central government has held several rounds of dialogue with the farmers camping around Delhi in protest, and have offered several concessions to address their fears and concerns, but the farmer unions have insisted on the repeal of the three laws, leading to a freeze in the talks.

The government said it offered “assurances” based exactly on what the farmers had asked for during the talks that lasted more than 20 hours, including a written guarantee for Minimum Support Price (MSP) but farmer union is not ready to consider these provisions.