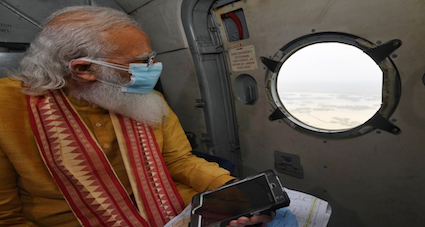 West Bengal chief minister Mamata Banerjee, even in moments as dire as aftermath of a terrible Cyclone Yaas, made an ugly show of arrogant and petty politics on Friday, its learnt.

Prime Minister Narendra Modi arrived in Kalaikunda airbase in West Midnapur district in Bengal after conducting an aerial survey of the State, and Odisha, devastated by the cyclone. He had the State Governor Jagdeep Dhankhar and a clutch of Union ministers accompanying him for a review meeting.

However, it’s learnt that both the chief minister Mamata Banerjee and the chief secretary of West Bengal were present in the same premises and yet didn’t come to receive the prime minister.

The PM, as well as the Governor and Union ministers patiently waited for half an hour for West Bengal representatives to turn up.

Suddenly Mamata Banerjee stormed into the meeting, handed over a bunch of papers on the cyclone impact to the Prime Minister and said she was leaving as she had other visits lined up, it’s claimed.

As if this wasn’t enough, Mamata Banerjee allegedly didn’t allow officers of the West Bengal government like the chief secretary and the home secretary to make a presentation. The entire presentation was loaded on the screen, however, the West Bengal’s officers were prevented from presenting it to the Prime Minister, it’s learnt.

It must be an incident one of its kind that a State, damaged by a cyclone, is so dismissive of high Constitutional position of a Prime Minister and Governor. Not to say the welfare of its own citizens, devastated by the ugly cyclone.

The State Governor Jagdeep Dhankhar later took to Twitter to express his disappointment at the conduct of Mamata Banerjee.

It would have served interests of state and its people for CM and officials @MamataOfficial to attend Review Meet by PM.

Non participation by CM and officials not in sync with constitutionalism or rule of law.

The Leader of Opposition Party (LoP) of both Odisha and West Bengal were invited in their respective meetings with the Prime Minister. The one of Odisha couldn’t attend as he was recovering from Covid-19. For Bengal, Suvendu Adhikari, as duly recognised LoP by Speaker of West Bengal assembly, was invited in the meeting.

Adhir Ranjan Chowdhury, leader of Congress in Lok Sabha, was also contacted to be part of the meeting. He thanked the Prime Minister and expressed his inability to attend the meeting as he was in Delhi.

It’s worth remember LoPs have become a part in decision-making only because several acts have been amended, courtesy the Prime Minister Modi.

As per rules, there is no LoP in Lok Sabha. Yet to accommodate Congress leader in Lok Sabha, the Modi government amended several acts—like selection committee of CBI—so that opposition leader has a voice.

Earlier, the Prime Minister took aerial surveys of regions affected by Yaas which caused havoc across South and North 24 Paraganas, Digha, East Medinipur and Nandigram districts of the state.

PM @narendramodi undertook an aerial survey to review the situation in the wake of Cyclone Yaas.

He later announced Rs 1,000 crore for relief measures; Rs 500 crores to be given immediately to Odisha, with equal sums for Bengal and Jharkhand. These will be released on the basis of damage.

The Prime Minister also announced Rs 2 lakh each for the families of each of those who died in cyclone-related tragedies. A sum of Rs 50,000 is for those injured in such incidents.

Mamata Banerjee has said she would undertake her own surveys on Saturday.