Manish Tewari and his “fake” innocence 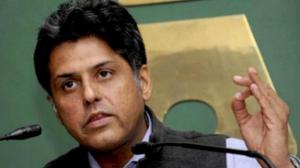 On the HRD’s move on “fake news”, now jettisoned, the strategy of Mainstream Media (MSM) has been two-pronged: One, it’s an assault on freedom of press (yawn); two, government must define what’s “news’.

The second defence is a stonewalling lawyer’s argument and it fittingly it has come from Manish Tewari who is from the Congress stable of Kapil Sibal and Abhishek Sanghvi (the names say it all).

So what’s “news”? News is information. If it is not truthfully reported, it’s “fake news”. One wonders why Tewari, once an Information minister, never came to ask the media houses: “Sirs and Madams, that you are in the business of news, what does news really amount to?” Wish somebody had asked him while he was in the minister’s chair: “Sir, what do you think is news”. Mr Minister himself would’ve escorted the journo out of the door. (As an aside, imagine worrying about the freedom of press when not being able to define news as per se!).

So the idea is, if you can’t define what’s news, how would you define what’s “fake news”? This jugglery was meant to stonewall and embarrass Smriti Irani. Tiwari and presstitutes of course would take no note of a number of fake news which appear on MSM daily and which OpIndia so brilliantly clubbed together recently.

Don’t expect presstitutes to come clean when caught with pants down. It runs to Press Council of India (PCI) for every speck of dust in the eye. But when the PCI chairman sees value in government’s move, the rogues of the stable—that’s mainstream media—don’t publish it.

These rogues are not obliged to any regulatory measure.

These shameless feel no accountability towards their readers.

They wouldn’t care to inform you that accredited journalists do not amount to entire community.

These thugs won’t tell you that the charm of being “accredited journalists” are the perks and benefits which comes with the tag.

Only if the Editor’s Guild of India and News Broadcasters Association were under the RTI, we would’ve known how many, IF ANY, transgressions of mainstream media in all these years these two august bodies have censored. Or whether the only time they clear their throat is when they cry “Assault on Freedom of Press.”

Where all this jockeying leaves the readers? No better than vegetables in the eyes of the presstitutes. Freedom of press? My foot. Freedom to loot and subvert; and scavenge on dead is more like it.

And India can go to hell.