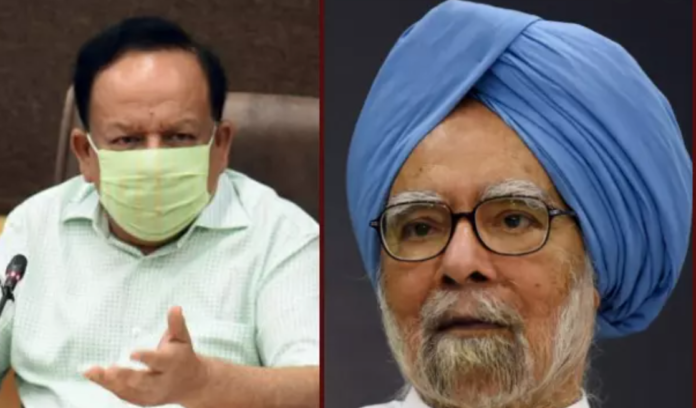 Union health minister Dr Harsh Vardhan today tore into ex-prime minister Dr Manmohan Singh in his letter to prime minister Narendra Modi where he has offered advice on how to control Covid-19 epidemic.

Dr Harsh Vardhan’s letter, which he has shared on twitter, pulls up Manmohan Singh for offering advice to “import” foreign vaccines when such a decision was taken by the Modi government a week ago.

He further asked Dr Singh to see the duplicity of his own statement in which he says that the Modi government should declare the percentage of population which has been covered under vaccination—and not by absolute numbers.

Says Dr Vardhan in letter: “Your advice to not get tempted to go by absolute numbers, but to go by percentage of population covered, is not incorrect. However, I am sure that you will agree with me that this is a practice that must be followed uniformly and junior members of your party too must follow your advice. Quite obviously, it cannot be that the discussion on total cases, active cases or mortality is based on absolute numbers, which the Congress party often tries to do, but the vaccination numbers continue to be touted as a percentage of the population covered.”

History shall be kinder to you Dr Manmohan Singh ji if your offer of ‘constructive cooperation’ and valuable advice was followed by your @INCIndia leaders as well in such extraordinary times !

Further, the letter reads: “A sitting Chief Minister of your party created a dubious world record of sorts by being the only head of government directly inciting people against an indigenously developed vaccine. Some Congress leaders even shamed the vaccines in public but took their doses in private, quietly.”

Further, “The irresponsible public pronouncements made by some of your leaders have resulted in a below national average vaccination coverage of senior citizens and even front-line workers in some of the Congress-ruled states. Please do note that it is these very same states that have also become the big contributors in the second wave of COVID-19 infection. The test positivity ratio in these states during the second wave is alarmingly high and they too could benefit from your counsel and wisdom.”

In conclusion, Dr Vardhan wrote: “History shall be kinder to you Dr Manmohan Singh ji if your offer of ‘constructive cooperation’ and valuable advice was followed by your Congress leaders as well in such extraordinary times!”