Manmohan was made PM by Sonia since he was no threat to Rahul: Obama 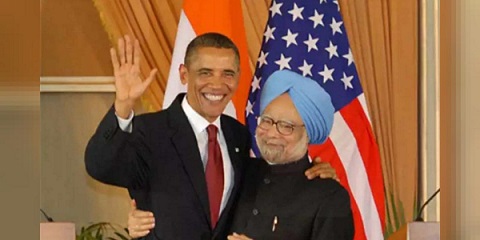 First there was this impression about Rahul Gandhi as being “nervous.” Further excerpts from former president of the United States, Barack Obama, now put his mother Sonia Gandhi, and the Indian prime minister he interacted with—Manmohan Singh—in the dock.

“More than one political observer believed that she’d (Sonia) had chosen (Manmohan) Singh precisely because as an elderly Sikh with no national political base, he posed no threat to her forty-year-old son, Rahul, whom she was grooming to take over the Congress party,” wrote Obama in his autobiography, “A Promised Land.”

Obama’s views are no different from political observers around the globe that Manmohan Singh owed his position to Sonia Gandhi who couldn’t have become the prime minister of India since she was a person of foreign origin.

Obama also believed Manmohan Singh was cautious in foreign policy though he appeared to him a man of wisdom and decency.

“While he [Manmohan Singh] could be cautious in foreign policy, unwilling to get out too far ahead of an Indian bureaucracy that was historically suspicious of US intentions, our time together confirmed my initial impression of him as a man of uncommon wisdom and decency…. What I couldn’t tell was whether Singh’s rise to power represented the future of India’s democracy or merely an aberration.”

He also wrote that PM Singh has shown his resistance in launching attacks against Pakistan after the 26/11 Mumbai attacks and that caused him political damage.

Recalling his dinner with Sonia and Rahul Gandhi at PM Singh’s home, he talks about Sonia Gandhi and says, she “listened more than she spoke, careful to defer to Singh when policy matters came up and often steered the conversation toward her son”.

As for Rahul Gandhi, Obama remarks “He offered up his thoughts on the future of progressive politics, occasionally pausing to probe me on the details of my 2008 campaign. But there was a nervous, unformed quality about him as if he were a student who’d done the coursework and was eager to impress the teacher but deep down lacked either the aptitude or the passion to master the subject.”