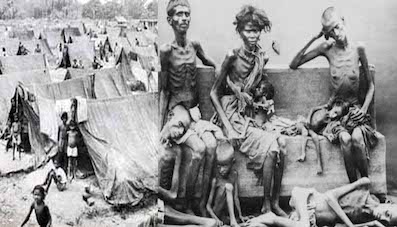 Blood Island: An Oral History of the Marichjhapi Massacre. It’s a book which would make most Indians wonder: How come I don’t know about it.

Marichjhapi lies 75km east of Kolkata. In 1979, thousands of lower-caste Hindu refugees, or Dalits, had fled persecution in Bangladesh and were openly shot upon by the orders of the Left Front government in West Bengal. The events leading up the Marichjhapi massacre is a sickening narrative of the horrible, hypocritical, diabolic, brutal, ugly and inhuman character of communists.

This all goes back to the early years of the Partition when the arrival of Dalit refugees after 1977 became the crisis of rehabilitation—something that West Bengal had not faced before.

The migrants were mostly poor who were engaged in petty works. Now when Partition happened the upper caste and the educated one or I should say the one who had the means to migrate- set up their homes in West Bengal but millions of lower caste people stayed behind.

There were two primary reasons: First, they didn’t have any resources to migrate, and second and the most important was the call from their leader Jogendra Nath Mandal, an influential minister in the East Pakistan cabinet who had assured them security. He was an ardent advocate of Dalit-Muslim unity, a disastrous experiment that was bound to fail. He was disillusioned by the anti-Hindu policies of his government. Islamists forcibly began the conversion of these Hindus to Islam. When the fears of intimidation rose, the uncertainties became real and then lakhs of Dalits and OBCs started moving into West Bengal. The state, one-third its original size, had few means to rehabilitate this large number.

The Union Government decided to settle the refugees in Dandakaranya (which translates into ‘jungle of punishment’), a vast, arid, and Adivasi-inhabited region comprising parts of present-day Odisha, Chattisgarh, Madhya Pradesh, and Maharashtra. Subsequently, the Dandakaranya Development Authority was set up to oversee the entire process.

But resettling refugees there, originating from riverine erstwhile East Pakistan, with its abundant rainfall and alluvial rich land, was a recipe for disaster. They were unhappy with their living conditions. The extreme climate- very hot summers and freezing winters made the condition too harsh for them.

Taking political advantage of the situation, the Communists, who made strong opposition in Kolkata then, took the front row seat and started stroking the resentment amongst the refugees.

They started encouraging the refugees settled in Dandakaranya to return to West Bengal. But they did not do so out of any empathy for the refugees.

Fast forward to 1977. The Left Front government was now in power in West Bengal. The refugees who had been rehabilitated in Dandakaranya became hopeful that the new popular government who had always espoused the refugee’s cause would now help them come back to West Bengal. But Left Front policies had changed.

The refugees in Dandakaranya, (under the organization of Udvastu Unnyanshil Samiti) had refused to be a part of the United Central Refugee Council, a Communist Party of India (Marxist) refugee organization, since they felt that the refugee problem was a national problem and their identity must not be part of any political group.

The Left front refused to entertain the demands of refugees settling in West Bengal. The government even later declared the Marichjhapi as a reserve forest and stated that the refugees were violating the forest act by destroying the existing and potential forest wealth.

Jyoti Basu, who once advocated the resettlement of the refugees, after becoming the chief minister, announced the economic blockade of Marichjhapi.

“The refugees used to bring drinking water, food grains, and medicines from the nearby Kumirmari village but after the economic blockade, it became impossible to go to Kumirmari to bring water, food, and medicine. We sent 16 women in a boat thinking they won’t harm women. But a launch- Indrajit MV79—sped towards the boat and rammed it. We could save only 14 from drowning and later found the other two in the Bagnan forest office. They had been molested,” Narayan Mondal, a survivor, told Times Of India.

Santosh Sarkar, one of those thousands of people who made Marichjhapi their home, said that after they were prevented from taking their boat out to fetch food and water they came up with a new plan. He said: “On the morning of January 31(1979), we decided on a new plan. Our leaders, Satish Mondal and Rangalal Goldar said women would rowboats to the next island to fetch clean water and grains, as well as medicine for the sick. Surely, the police launches would not ram into boats carrying women. But we were proven wrong. Those bxxtards in police uniforms did not care for our women either. They rammed their launches into the boats and drowned all three boats.’

The islanders who were watching from the shores as their mothers, wives, and sisters, were aghast at the police action. They gathered bows and arrows, lathis, bricks, and stones, whatever they could gather from their benefactors in Kumirmari, and rushed to the shore. The policemen opened fire, both at the men in boats and those gathered on the shore of Kumirmari.

According to survivors’ accounts, the police did not even spare about 15 kids – aged between five and 12 – who had taken shelter in their school (a thatched hut). The kids had gathered there to make arrangements for Saraswati Puja, which was to be celebrated the next day (February 1), when the cops and cadres landed at Marichjhapi. Hearing the firing and cries of their elders, the scared kids huddled inside the school, cowering in fear. The cops and cadres herded them out of the school and decapitated them.

This annihilation of Dalits and OBCs demonstrates the state’s track record of complicity in the brutal killing of its citizens. Not only this but it also underlines the significant links between state-sponsored violence that have remained unaddressed even till today.

Also, while looking back at this, I see why nobody ever questioned Jyoti Basu? Why did he take the U-turn? HinduLivesDon’tMatter?

Marichjhapi which is almost a forgotten chapter in West Bengal history should be retrieved from the dustbin of history and people should ask current chief minister Mamata Banerjee also. She promised a judicial probe in 2011. Ten years later we are still awaiting its outcome. But what could you expect when TMC is advicing Left and Congress to join them in the assembly polls in next few months. Who cares for Hindu lives lost?

The book I mentioned at the start lays bare the lies and deceit which is the hallmark of Left-Liberals, the group which does the bidding of monotheist religions such as Islam and Christianity and are sworn enemies of polytheist ones, such as Hinduism. The crime of those Dalit Hindus was they didn’t owe allegiance to Islam or Christianity. Today, red carpet is being rolled out to welcome infiltrators from across the borders.