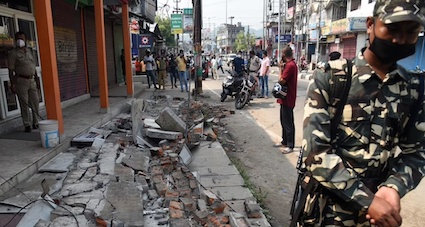 A massive earthquake of 6.4 magnitude hit Assam on Wednesday morning, causing widespread damage in the Northeast state. The epicentre of the earthquake was Dhekiajuli town, 140 km (86 miles) north of Guwahati. The earthquake struck at 7:51 am at a depth of 17 km from the surface and was followed by two aftershocks of 4 and 3.1 magnitude respectively.

Strong tremors were felt in parts of the northeast as well as north Bengal. While there are no reports of anyone being injured, photos have emerged of broken walls and windows, and walls developing cracks.

Many buildings in Tezpur, the district headquarters of Sonitpur, as well as Guwahati and other places reportedly developed cracks.

Assam CM Sarbananda Sonowal tweeted: “Big earthquake hits Assam. I pray for the well-being of all and urge everyone to stay alert. Taking updates from all districts.”

“Spoke to Assam CM Shri @sarbanandsonwal Ji regarding the earthquake in parts of the state. Assured all possible help from the Centre. I pray for the well-being of the people of Assam,” he tweeted.

A senior Assam government official said there were no reports of loss of life. Some buildings and hotels have reportedly suffered damage. Power supply has been disrupted in some areas. There are unconfirmed reports of some injuries.