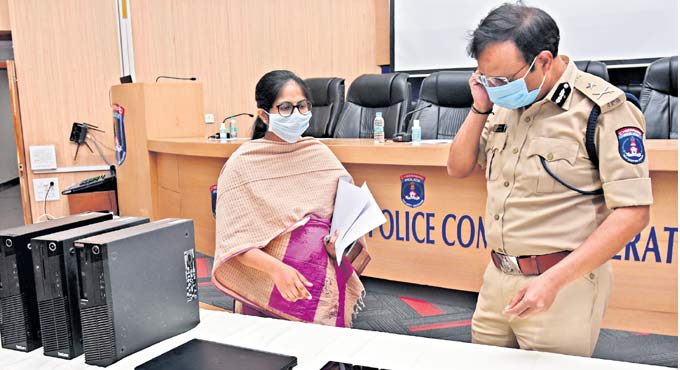 In a shocking event, the Hyderabad Police on Tuesday has arrested 11 people operating a money lending scam through app-based instant loan companies in which they lend money at a high-interest rate (up to 35%) and then harass the defaulters through a coercive manner. The apps apparently were not approved by the Reserve Bank of India (RBI). Police have frozen 75 bank accounts holding Rs 423 crore.

The matter came to light when Telangana police were alerted about three people who committed suicide after being harassed by the money lenders. Acting on the matter, the police conducted raids in two places at Udyog Vihar in Gurgaon and three places in Hyderabad resulting in the arrest of promoters of such online loaning firms.

Hyderabad police commissioner Anjani Kumar in his statement mentioned that these companies have made thousands of people their victims.

“Thirty loan apps were being run by four companies—two each in Hyderabad and Gurugram. In these four offices, about 1,100 employees were working as tele-callers to run the multi-crore illegal businesses, through which thousands of people across the country were being victimized. Eleven people have been arrested and 700 laptops seized”

Officials informed that the call centers operated by these companies employed hundreds of youngsters who were trained to lure customers, entrap them into borrowing successive sums from multiple apps and then abuse, defame and blackmail victims to recover the borrowed money.

Anjani Kumar also explained how these companies have the overseas link and appointed Indian nationals as dummy directors on behalf of the Chinese nationals. The companies took instructions from their heads based in Indonesia.

“The entire operation of these loan apps appears to be run by Chinese nationals at the helm. Same was indicated during the investigation into the colour prediction gaming apps scam in which crores of rupees were transferred to shell companies, which were registered as NBFCs,” Kumar added further.

While the RBI has been consistently alerting about financial frauds, some microfinance institutions are reportedly pumping money into loan apps. These loans are extended as personal loans, which carry higher interest rates and are designated as subprime loans. According to police, there are at least 60 apps on the Google play store that are neither registered nor recognized by the RBI.