‘Match-fixing between UDF & LDF: 5 years one loots, next 5-year the other loots’ 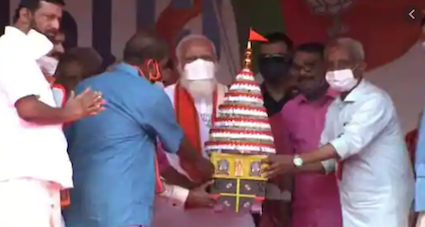 Campaigning for the BJP’s Palakkad candidate E Sreedharan, Prime Minister Narendra Modi on Tuesday targeted Kerala’s ruling LDF over the gold smuggling scam, saying that the CPI(M)-led government “betrayed” the people of the state for a few pieces of gold just as “Judas betrayed Lord Christ for a few coins”

The BJP has made the gold smuggling case its prime issue in the election issue, as home minister Amit Shah has also previously accused the CM of being directly linked to the suspects in the scam.

Not only LDF, he also took a swipe at Congress-led UDF and said that it is “only different in name.”

“For many years, the worst-kept secret of Kerala politics was the friendly agreement of UDF and LDF. Now, the first-time voter of Kerala is asking – what is this match-fixing? Five years one loots, five years the other loots,” said PM Modi, addressing an election rally in Palakkad.

Talking about BJP’s plan for Kerala, PM Modi said, “The BJP’s vision for Kerala is forward-looking and aspirational. That is why, the youth of the state, the professional communities across the state, are openly supporting the BJP. Across India too, this trend is being seen.”

PM Modi coined a new acronym for Kerala elections. He called ‘FAST’ as the mantra, in which F means fisheries and fertilizers, A means agriculture and ayurveda, S means skill development and social justice and T means tourism and technology.

Elections for the 140-member Kerala assembly will be held in a single phase on April 6. The counting of votes will take place on May 2.