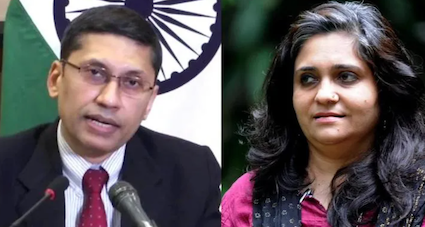 The Ministry of External Affairs (MEA) on Wednesday rejected as ‘unwarranted’, a statement by a UN official condemning the arrest of Teesta Setalvad in the 2002 Gujarat riots case.

“We have seen a comment by the Office of the High Commissioner for Human Rights regarding legal action against Teesta Setalvad and 2 other persons. The remarks are completely unwarranted and constitute interference in India’s independent judicial system,” MEA spokesperson Arindam Bagchi said in a statement.

He added that authorities in India act against violations of law, strictly in accordance with established judicial processes. “Labelling such legal actions as persecution for activism is misleading and unacceptable,” Bagchi said.

Earlier this week, Mary Lawlor, the United Nation’s Special Rapporteur on Human Rights Defenders expressed concern over the arrest of activist Teesta Setalvad by the Gujarat Police and called for her release. Lawlor, in a tweet, said Setalvad “is a strong voice against hatred and discrimination.” She also noted that “defending human rights is not a crime.”

Setalvad was arrested on June 25 by the anti-terrorism squad of Gujarat Police and sent to five days of judicial custody for allegedly conspiring to falsely implicate innocent persons in the Godhra riots case. Along with Setalvad, former Gujarat director-general of police SB Sreekumar was also arrested and sent to judicial custody.

The action came hours after Home Minister Amit Shah, in an interview with ANI blamed Setalvad’s NGO for giving baseless information about the 2002 riots to the police.

Last week, the Supreme Court dismissed as “devoid of merit” a plea by Zakia Jafri, challenging the clean chit to then Gujarat Chief Minister Narendra Modi and others in the riots cases. Zakia Jafri is the widow of former Congress MP Ehsan Jafri who was killed in the riots.

A three-judge bench of the court headed by Justice AM Khanwilkar held that Setalvad, co-petitioner in the case, exploited the emotions of Zakia Jafri.

“Antecedents of Teesta Setalvad need to be reckoned with and also because she has been vindictively persecuting this dispute for her ulterior design by exploiting the emotions and sentiments of Zakia Jafri, the real victim of the circumstances,” the court said in its order.