Mehbooba watches L-Gs come and go; and her PDP hang by a thread 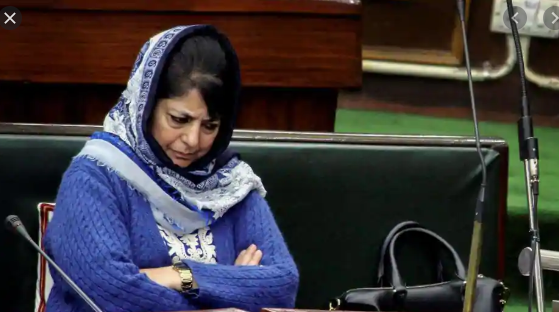 Mehbooba Mufti, still chief of People’s Democratic Party (PDP), is watching Lieutenant Governors come and go even as she hibernates in her den. The Kashmir she believed rested on her elegant shoulders, or at least that’s what she wanted the world, if not Pakistan, to believe, has slowly ebbed to the floor of the Dal Lake.

Meanwhile her men, and women, who are released haven’t taken her mantle and spoken on the abrogated Article 35A and Article 370.

The main reason is believed to be lack of any authorisation from her to any leader, or group of leaders to lead the party in her absence. Or speak on behalf of the PDP and decide its next course of action.

Incidentally, among the known faces left in the party are former deputy chief minister Muzaffar Baig, Naeem Akhtar, her maternal uncle Sartaj Madni and a couple of others. Baig is perhaps the only founder member of the PDP still holding on to its existence which is hanging by a thread.

One of the founder members, Ghulam Hassan Mir, had parted company years ago. Senior leader Tariq Hamid Qarra also left PDP and is now a member of the Congress. The parting of ways of most of the leaders was believed to be bitter. It was caused by promotion of Mufti family members and loyalists, much to the chagrin of the party veterans.

Muzaffar Baig, an ace lawyer and one of Mufti Mohammad Sayeed’s most trusted lieutenants once, was for a long time sidelined and undercut deliberately. Mufti’s demise, the BJP parting ways with the PDP and such other events forced Mehbooba to bring him back as patron at the helm of a sinking party.

On Wednesday, he wrote an article in a leading portal and discussed the road ahead for Jammu and Kashmir. He argued that the “real and core issue is the restoration of Articles 370 and 35A”.

He suggested that the “right thing would be to request the Supreme Court to deliver its verdict on the question of abrogation of Articles 370 and 35A”. Further, he said that if the apex court upholds the Central government’s actions, the “right thing to do would be to include Jammu and Kashmir in Article 371 of the Constitution”.

Incidentally, Article 371 has some provisions dealing mostly with north-eastern states, besides some others. Article 371 deals with Maharashtra and Gujarat, 371A with Nagaland, 371B with Assam, 371C with Manipur, 371D with Andhra Pradesh & Telangana, 371F with Sikkim, 371G with Mizoram, 371H with Arunachal Pradesh, 371 I with Goa and 371J with Karnataka.

Of course, none of the states named in different provisions of Article 371 has a separate Constitution like J&K had once upon a time. Still, the domicile rules offer significant protections to the original inhabitants of these areas.

Speaking a couple of days ago, National Conference supremo Farooq Abdullah had also advocated leaving any decision regarding possible restoration of 35-A and 370 to the Supreme Court. He had thus effectively ruled out leading any public movement for restoration of status that prevailed before August 5, 2019.

One thing is not clear though regarding Baig’s suggestion regarding inclusion of Jammu and Kashmir in Article 371. Without Mehbooba’s open endorsement, it cannot be taken as the official stance of the PDP. It can be perhaps interpreted as his personal opinion, an opinion worth considering seriously.

It bears mention here that Baig enjoys a good personal rapport with Prime Minister Narendra Modi, Congress veteran Ghulam Nabi Azad and some other leaders too. He had made a couple of speeches praising Mr Modi and these had apparently not gone down well with the Muftis.

Within Jammu and Kashmir also, he remains one of the most respected leaders across the political spectrum. Young leaders like Sajad Lone look forward to him for guidance and his words cannot be brushed aside easily by Mehbooba either. It will be interesting to watch things unfold and know the reaction of different political leaders to his suggestion in the coming days.