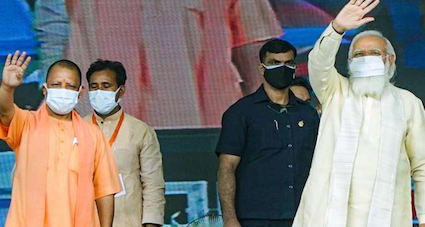 Prime Minister Narendra Modi, on his visit to his constituency Varanasi today, allotted Rs 1 lakh crore for the agriculture infrastructure and Agriculture Infrastructure Fund (AIF) guidelines for the upgradation of mandis.

It will expand the beneficiary institutions, including Agricultural Produce Market Committees (APMCs), to avail credit of up to Rs 2 crore from the fund to set up cold storage, sorting, grading, and assaying units.

PM Modi gifted developmental projects worth â‚¹1,583 crores to Varanasi. He had said ahead of the visit that these projects will further improve ‘Ease of Living’ for the people of Kashi and the entire Poorvanchal region.

The prime minister also inaugurated an international cooperation and convention centre, ‘Rudraksh’, that will offer a glimpse of the cultural richness of the ancient city of Kashi. As many as 108 Rudraksh have been installed at this convention centre and its roof is shaped like a Shiva Linga, officials said, adding that the entire building will glow with LED lights at night. It is built on 2.87 hectares of land and  has a seating capacity of 1,200 people.

He also said that Varanasi has emerged as a “large medical hub of Purvanchal”, adding that several healthcare facilities have been set up to strengthen the medical infrastructure. PM Modi also said that maximum testing against Covid-19 was conducted across India in Uttar Pradesh.

Expressing his admiration for healthcare and frontline workers, he hailed UP for “the maximum number of vaccinations in the country.”

PM Modi said that the rule of law has returned to Uttar Pradesh under Adityanath, adding that criminals in the state can’t hide from the law now.

“It is not as if schemes were not brought for UP before 2017, it is not as if money was not released. We were given the opportunity to serve you in 2014, even at that time, swift efforts were made from Delhi. But at that time, hurdles used to come up in Lucknow,” he added.