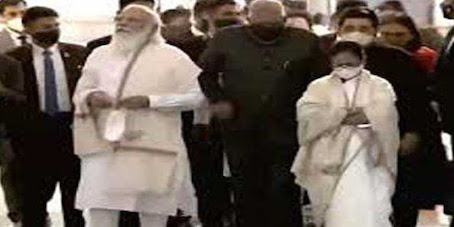 Prime Minister Narendra Modi and Bengal chief minister Mamata Banerjee made a rare joint appearance at Victoria Memorial in Kolkata today but the day wasn’t without its acrimony.

After Modi had addressed a crowd to mark the 125th birth anniversary of Netaji Subhash Chandra Bose, now to be known as “Parakram Diwas”, Banerjee refused to speak after a section of the crowd chanted “Jai Shri Ram” and “Bharat Mata Ki Jai.”

“There should be some dignity at a government programme. I am grateful to the Prime Minister and Ministry of Culture for inviting me. But one should not insult someone after inviting that person. In protest, I am not saying anything,” Banerjee said.

Earlier, Modi had said “Netaji had dreamt of a strong India; from LAC to LOC, we are following his footsteps.”

He said Netaji had once asked people not to lose hope of free India. Similarly, no one can stop India from being Atmanirbhar.

“Netaji would have been immensely proud to see India manufacturing own Covid vaccines and also helping other countries.”

Modi land at the NSC Bose International Airport on Saturday afternoon and then took a helicopter for the city. His chopper landed at the RCTC ground in the heart of the city where he was received by governor Jagdeep Dhankhar and state minister Firhad Hakim.

Hours before PM Modi arrived in Kolkata, Ms Banerjee attacked the centre for failing to declare the day a national holiday and build a memorial for the freedom fighter. “I protest the centre’s decision to not yet declare Netaji’s birth anniversary as a national holiday. You are building new parliament and buying new planes… why no memorial for Netaji?” the Chief Minister said.

Bengal Forest Minister Rajib Banerjee resigned from his post on Friday. He is the third minister to resign in the last six weeks. The first to go was Suvendu Adhikari and he has joined BJP. The second was Laxmi Ratan Shukla, cricketer turned minister of state for sports.

Earlier in the day on a visit to Assam, Modi distributed land allotment papers to indigenous people and said: “There are lakhs who didn’t have any documentation of their land. But now chief minister Sarbananda Sonowalji and his government have worked hard to ensure that people get their recognition.”

Home minister Amit Shah had landed ahead of Modi in Assam.