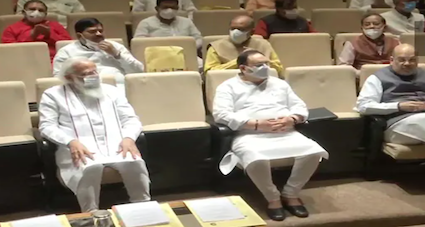 Prime Minister Narendra Modi was deeply “anguished” at the conduct of Trinamool Congress MP Derek O’ Brien who mentioned the passing of 12 bills in the first 12 days of the Parliament as one of “making paper chaat.”

Modi is said to have made this remark at the BJP parliamentary party meeting which was attended, among others, by Union home minister Amit Shah, party national president JP Nadda and other leaders.

Union Minister Pralhad Joshi said the Prime Minister slammed the Opposition for their ‘arrogance’ while pointing to  O’Brien’s remark.

In the first 10 days, Modi-Shah rushed through and passed 12 Bills at an average time of UNDER SEVEN MINUTES per Bill ðŸ˜¡(See shocking chartðŸ‘‡)

“Yesterday, a tweet was posted by TMC (MP Derek O’Brien). PM said it is an insult to people who elected MPs. PM expressed anguish. ‘…Making papri chaat’ was an insulting comment. Tearing of papers, throwing them and not apologising is arrogance is what PM said,” Joshi said.

It was Trinamool MP Santanu Sen who watched IT minister Ashwini Vaishnaw’s papers, as he was about to make a statement on the Pegasus scandal.

Pralhad Joshi and Rajya Sabha deputy chair MA Naqvi also hit out: “We are ready to discuss all bills… We don’t want to rush through… one member from Trinamool has insulted Parliament. He should apologise to the country.”

Union minister V Muraleedharan detailed on the party’s parliamentary party meetiing, saying: “PM started with happy news that July has brought in. We had Rs 1.16 lakh crore GST collection. News from Tokyo Olympics, whether it’s bronze by PV Sindhu or achievements of hockey teams, has come in July.”

“Parliament is being insulted by the acts of opposition in both the Houses. The person who snatched the paper and tore it is not repentant of his acts. Comments made by a senior MP regarding the passage of Bills is derogatory,” Muraleedharan added.

Meanwhile, both houses of Parliament continued to witness sloganeering by the Opposition over demand for discussion on Pegasus snooping issue, farm laws, resulting in repeated adjournments.