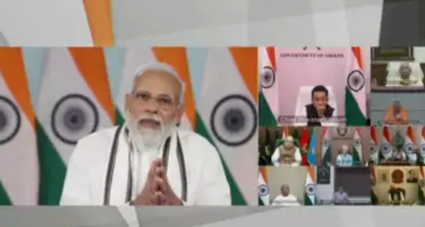 Prime Minister Narendra Modi on Wednesday hit out at the opposition over fuel prices.

PM Modi, while speaking in a meeting with the Chief Ministers of different states on the COVID-19 situation, spoke about the high fuel prices in states.

The PM further called out CMs of the states which did not reduce taxes on fuel prices when the Centre did.

Speaking in the meeting, PM Modi has now hit out at the opposition over the high fuel prices in the opposition-led states. The PM went on to request states to reduce VAT to bring down the fuel prices.

“To reduce the burden of rising fuel prices, central govt waived off taxes. Some states also reduced taxes, but others didn’t provide relief,” PM Modi said while speaking to CMs.

“I request those states to reduce VAT. This will help in cooperative federalism,” PM Modi added. He went on to mention that BJP-led states like Gujarat and Karnataka incurred losses due to the waiving of taxes on fuel. “However, few neighbouring states did not reduce tax on fuel and earned from it,” PM said.

He also called on the MK Stalin-led Tamil Nadu and said that the rates of petrol in the state are ‘very high’ and requested the states to reduce VAT. PM Modi was chairing a meeting with Chief Ministers on Wednesday, April 27, to review the COVID-19 situation.

Fuel prices rose to record high this month. Earlier, Finance Minister Nirmala Sitharaman had underlined that the price of fuel had shot up several times in the international market following the outbreak of the war, and hence the rise in fuel prices in the country was unavoidable. Following this, the government had faced heat from the opposition parties over the surge in fuel prices, with Congress leaders accusing the BJP-led government of ‘tax-gouging’, ‘torturing the public’, and ‘profiteering’ with the price surge.

India imports 85 per cent of its oil needs and the Russia-Ukraine invasion and escalating sanctions have hampered the oil flow across the globe.