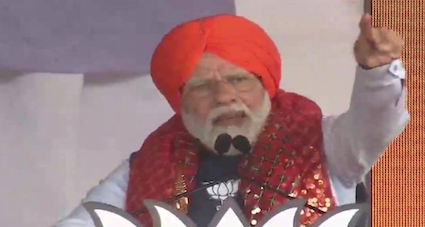 Prime Minister Narendra Modi today arrived in Punjab, in Jalandhar to be precise, for a rally in person, but alongside came a fresh controversy.

Modi’s security was breached on his visit to Ferozepur on January 5 when his convoy was left stranded on the road by protesting farmers who had blocked the road.

It was a major security lapse concerning the head executive of the state and presently a Supreme Court appointed committee is looking into the matter.

However today, due to that grave lapse, Punjab was turned into a no-fly zone ahead of the prime minister’s visit. In its wake, an allegation has surfaced that chief minister Charanjit Singh Channi couldn’t take off from Chandigarh for Hoshiarpur where his party’s leader Rahul Gandhi was addressing a rally.

PM Modi had his own say though. He revealed that in 2014, when he and Congress MP Rahul Gandhi were both scheduled to pass through Punjab, his helicopter was halted to give way to Gandhi’s. The incident happened when he served as the Gujarat CM and was announced as BJP’s PM face.

“In 2014, I was the CM of Gujarat and BJP’s PM face, I was going all over to fight elections. One day, I had to come to Pathankot, and then take a helicopter to Himachal. You will be shocked, Congress’ Yuvraj (Rahul Gandhi), who was just a party MP also had a program in Amritsar then. I was not allowed to fly. I was delayed by 1 hour, when I reached Pathankot, my helicopter was not allowed to fly, just because Rahul Gandhi was coming to some corner of the state,” PM Modi revealed.

Modi, however, had his own issue with the state of security in Punjab.

Addressing the rally in Jalandhar this afternoon, Modi said: “I wanted to visit Devi Ka Talab but the Punjab Police said it can’t allow due to security. This is the condition of security in Punjab.”

Modi also took up the comment of Congress leader Priyanka Gandhi Vadra  who said Captain Amarinder Singh was dismissed because he was being “run by remote control ” by BJP in the Centre.

“They said we didn’t want Captain’s government to be run by Delhi. This means Congress governments are run by remote control by one family, not by the Constitution.”

If the Captain worked with the central government, didn’t he go by the principal of federalism under the Constitution, asked Modi.

“Look at the state of the Congress. Their own party is falling apart. Their own leaders are exposing them. A party with so much infighting—can it give a stable government to Punjab?” Questioned Modi.

Earlier in the day, Modi addressed a rally in Akbarpur in Ambedkar district in Uttar Pradesh where he not only launched a frontal attack on Samajwadi Party but also at Trinamool Congress in far-off Goa where too the elections took place today.

Modi reacted to a comment by TMC MP Mahua Moitra who claimed in an interview that his party was looking to divide the Hindu votes. “Is that secularism,” asked Modi, wondering if secularism in a democracy is helped by divisive politics.

Modi then launched a frontal attack on Akhilesh Yadav’s Samajwadi Party. He claimed that this clan had “distributed” the state amongst themselves and was was busy in “looting” it during their tenure. He asked people if they would vote for a party which would create “Mafiaganj” in every district of the state.

“If they had their way, they would’ve made Kanpur and other such areas in UP a “Mafiaganj” mohalla. Now their “mafiagiri” is counting its last breath. These “parivarvaadis” want to give power to these mafias again. UP public will have to stay alert,” said Modi.

Modi said in every election the Samajwadi Party is seen with a new ally.

“Those who bring new alliance partners and kick them out in every election, would you trust such parties?..could such people trust or support the common public?”