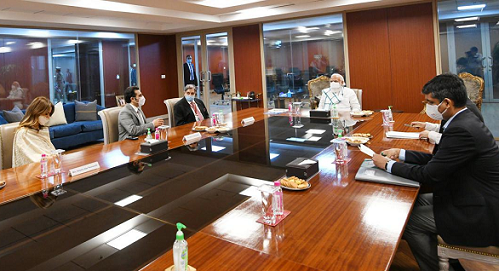 Prime Minister Narendra Modi visited Ahmedabad, Hyderabad and then Pune on Saturday to know first hand about “preparations, challenges and roadmap” in India’s efforts to get corona vaccines for its citizens. During the tour of these cities, he visited three different companies involved in preparing vaccines for controlling the virus.

He began his tour by first visiting Zydus Cadilla’s plant located outside Ahmedabad at Changdor industrial area. The company has completed first phase trials of its vaccine ZyCoV-D and started second phase trials in August. He wished the company success in its endeavours and said in a Tweet that the government is actively working with it.

From Ahmedabad, Modi flew to Hyderabad where he visited Bharat BioTech which is working on Covaxin. This is being mentioned as India’s indigenous vaccine to combat the pandemic. The company issued a statement later saying it was encouraging for their scientists involved in scientific discovery.

It was then a visit to Pune where Serum Institute of India (SII) is working with pharmaceutical firm AstraZeneca and Oxford University for preparing a vaccine for Covid-19. Modi was wearing a PPE kit while visiting various facilities to observe the necessary protocols.

Tweeting about the visits on Friday, the Prime Minister’s Office (PMO) had said that these were meant to keep him updated on various vaccines. Some days ago, on November 24, the PM had spoken with chief ministers of several states urging them to prepare cold storage facilities for the vaccine distribution.