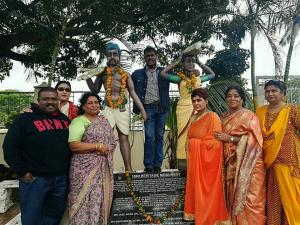 India’s footprints in Africa are gaining ground and the year 2018 is proving to be a significant milestone.

In next three years, India plans to establish 18 new embassies and consulates in the Africa states, in particular, in Equatorial Guinea, Eritrea, Somalia, Sierra Leone and some others.

The year began with the Republic of Seychelles and India inking projects for Assumption Island. It would help in controlling and protecting maritime economic zones and suppression of criminal acts. India would also allocate $8 million for the tiny country.

March saw a flurry of activities. In India, New Delhi hosted an International Solar Alliance in which 47 nations took part. India allocated $1.4 billion as credits for 27 countries, mainly in Africa. In the same month, President R.O. Kovind visited Mauritius and Madagascar. Mauritius was given a credit line for purchase of military products worth 100 million dollars. To Madagascar, went a credit line of $81 million for its agriculture and farm technology. Kovind, the very next month in April, paid a visit to Zambia. India has so far made direct investment of $5 billion. Nearly all aircrews of Zambian Air Force and up to 40 % of Army command staff are being trained by India.

Between 2007-2018, the trade between India and Africa has grown five times—from $12 to $57 billion. Direct investment by India is to the tune of $50-60 billion. This is of course less than China who has a trade turnover of nearly $200 billion.

Africa has always been important to India. A large Indian communities have made the big continent its’ home. Around 2.8 million Indians live in Africa out of which more than half are in South Africa. Mauritius, Kenya, Tanzania, Uganda, Mozambique and Zambia are other big centres of Indian population. Most Eastern and Southern African states have Indian quarters, shopping centres and cultural and entertaining facilities.

India has obvious interest in controlling China’s influence in Africa where it has invested up to $1 trillion. It’s “One Belt One Road (OBOR)” would help them acquire logistic, transport and military infrastructure in the continent. India, together with Japan,,has created the Asia Africa Growth Corridor (AAGR) to counter it. Already China, by some estimate, has invested $1 trillion. India is thus looking over its shoulder in improving ties with African nations. Its’ naval base in Djibouti is already bigger than one of US.

The hydrocarbon sector of Africa interests India. Nearly 17 per cent of its oil comes fro Tropical Africa. Delhi is now the largest oil importer in Nigeria and the second largest is Angola. India has number of oil fields in Gabon, Ghana, Cote d’Ivoire, Mozambique and Sao Tome and Principe. ONGC Videsh Limited has invested $2.5 billion in oil exploration and production in Sudan. Essar was the main shareholder of Mombasa (Kenya) oil refinery, the largest in East Africa, till two years ago.

Indians are also prominent in cargo transportation. Lorries of Indian Tata brand are seen in all countries of the continent, south of Sahara. Tata Africa Holding with help from Export-Import Bank (EXIM Bank) has several assembly enterprises. The Indian state concerns, RITES and IRCON are helping Kenya, Mozambique, Senegal and Sudan build railroads.

India surely doesn’t have the freedom of China which actively uses state funds in Africa. Indian business usually relies on its own. However, India is making up for it with its vigorous activity.

(This is an edited version of a piece by Pavel Nastin which he has penned for New Eastern Outlook online magazine.)