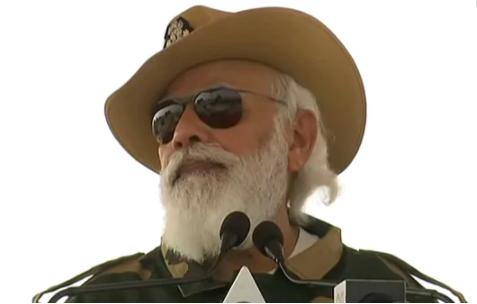 In keeping with his principle of spending Diwali with soldiers on forward locations since 2014, Prime Minister Narendra Modi reached Longewala post of Jaisalmer sector on Saturday.

He also chose to issue a stern warning to troublesome neighbours Pakistan. “If someone tries to test us at the border, then the answer will be befitting,” Modi said.

Modi’s visit to this post comes a day after 11 people, including five soldiers and six civilians, lost their lives in wanton firing by Pakistani forces in forward areas of Line of Control (LoC) in Jammu and Kashmir. There was strong retaliation by the Indian forces and many Pakistani soldiers lost their lives. Many of their bunkers were destroyed in the retaliatory firing.

Modi said he visits soldiers in Diwali every year because he wants to be “with the family of his own.”

“Some people may wonder why Modi-ji goes to meet soldiers year after year on Diwali. But tell me one thing, Diwali is a festival we celebrate with family, and those we call our own… so each year, I spend time with you all, because you all are my own, my family,” he said and thanked the soldiers on behalf of the entire country.

“You may be at the snow-capped mountains or in deserts, my Diwali is complete only when I come amid you. My happiness doubles when I look at the joy on your faces,” he said.

Referring to China, but without naming it directly, Modi said the entire world is troubled by “expansionist forces” and that expansionism showed a “distorted mindset” of 18th century. India believes in peace of borders but if someone tests its resolve to defend its territory, the country is capable of giving a fierce reply, he said.

Recalling the 1971 War with Pakistan, and the battle of Longewala which would celebrate its 50th anniversary next year, Modi remembered Major Kuldeep Singh Chandpuri (later Brigadier) who had battled the marauding Pakistani tanks here and turned it into their graveyard.

“They didn’t know that they will be facing the bravehearts of India like Brigadier Kuldip Singh Chandpuri. Under his leadership, Pakistani forces were decimated. His parents named him Kuldip thinking he would be the heir of their generation but little did they knew that he would be ‘rashtra deep’ . 1971 war against Pak was example of exemplary coordination among Army, Navy and Air Force,” Modi said.

It may be recalled here that J P Dutta had produced superhit film “Border” which was based on the story of Battle of Longewala.

It was on November 23, 2003, on the eve of Eid, that India and Pakistan had agreed on a ceasefire. The two countries were then led by Atal Bihari Vajpayee and General Pervez Musharraf. For a couple of years after that, peace and tranquillity prevailed along the borders. However, ceasefire violations have become fairly common in the past few years, with Pakistani soldiers often firing on Indian positions, including civilian population.

PM Modi had visited Leh in July this year to send a clear message to China after 20 soldiers had lost their lives in Galwan on June 14/15. The Jaisalmer visit is this his second such visit to meet soldiers deployed in forward areas this year. During the past few years, he has visited different formations on LoC, including Siachen, on Diwali.