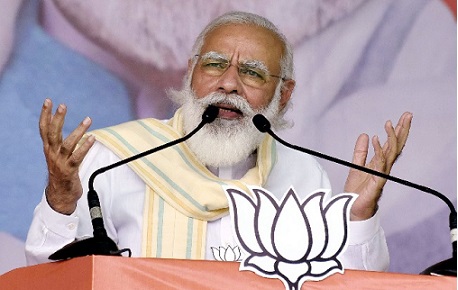 Prime Minister Narendra Modi seems to be fast changing gears now in the third leg of his poll campaign in Bihar. Addressing an electoral rally in Chhapra on Sunday, he went full throttle ahead in attack on Mahagathbandan’s yuvrajs, Tejashwi Yadav and Rahul Gandhi.

He said “Jungle ka Yuvraj”, a reference to Tejashwi, and the other Yuvraj (Rahul), were both fighting to save their thrones. The clear fight was between “double engine ki sarkar” and the parties led by the Yuvrajs, he said.

Expressing confidence that the government will be voted back into power, Modi asserted that Lalu Prasad Yadav cared only for the family. Standing up with the poor and working for their welfare was not one of his priorities.

Modi recounted how the NDA government helped the poor cope up with the problems they faced by providing them free food in their hour of crisis. This helped mitigate their sufferings during the ongoing pandemic significantly, he added.

Chhapra is considered a stronghold of Lalu Prasad Yadav and by focussing on this, Modi expected to make a significant dent in Rashtriya Janata Dal’s vote share here. He is going to address at least two rallies here in the company of Chief Minister Nitish Kumar, according to sources. This is meant to send a clear message to the voters that Modi is standing steadfast with “Sushasan Babu”, as Nitish is widely known.

Modi said the high polling percentage in the first round of elections for 71 seats clearly showed that the government was coming back to power. He said he is sure the government will defeat the challenge of Yuvrajs just as it had defeated Yuvrajs in UP also. Incidentally, this was an indirect reference to the coming together of Akhilesh Yadav and Rahul Gandhi in UP polls.

The second and third phases of Bihar elections are scheduled for November 3 and November 7. Campaigning for second phase will end on Sunday evening.

This was a jibe against Tejashwi’s allegation that Nitish had neglected education and health sectors.