Modi tears into Congress and its Adani-Ambani rant 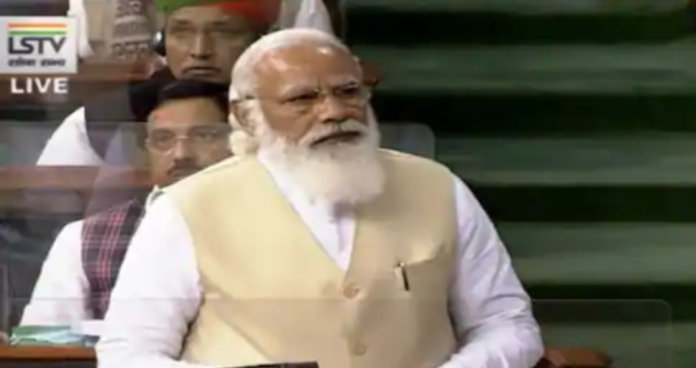 Prime Minister Narendra Modi tore into Congress on the issue of farm laws and made some telling blows as he responded to motion of thanks to President’s address in Lok Sabha on Wednesday.

Modi took the “Adani-Ambani” rant head on which is the plank on which Opposition has based its opposition.

He then turned his attention on the current farmers’ agitation.

“I consider the farmer agitation pious. But when “andolan-jeevis” (professional protestors) hijacked, did not allow toll plazas to work, destroyed telecom towers, do these serve the pious agitation.

“What kind of agitation demands breaking up a toll plaza? Holding posters of those who perpetrated communal violence, those terrorists who are in jail and demanding their release—this made the farmer agitation unholy,” Modi said.

It’s worth a recall that during the recent farmer protest, some 1400 Reliance Jio mobile towers were damaged and looted in Punjab by the protesting farmers. The rants on “Adani-Ambani” by Rahul Gandhi wherein the “farmers” believed they were being looted by these corporates.

“I see Congress leaders discussing the farm laws. They discuss the colours, black (laws) or white, but would have been nicer if they discussed the content,” stung Modi as only he could.

The prime minister importantly said the new laws are not compulsory for all farmers. It’s up to them to seek benefits or not: They can choose to sell their produce to private players or not.

Congress predictably created a ruckus in the Parliament. Modi said it was nothing but a well-planned strategy. “They are unable to digest that people are seeing through the truth. Through their games, the trust of the people can never be won,” said Modi.

Even as Congress MPs staged a walkout, Modi said that party is divided and confused. “Neither it can work for its own good, nor do any good for this nation.”

Modi said India can’t be stuck in the 18th century groove in the 21st century. Should we ask to do reforms, said Modi. Nobody asked for laws against dowry, triple talaq, child marriage but they were implemented. Law for right of girl-child in inheritance, Right to Education were made keeping the good of society in mind.

He said till investments are made and new technologies are introduced, Indian agriculture and its farmers would never look up. Massive potential exists in Indian culture. “For example, we think that strawberry is a crop of cold regions but would you believe that Kacchh in Gujarat and Bundelkhand in Uttar Pradesh-Madhya Pradesh are producing strawberries.

In our culture, tradition, festivals are intricately tied with agriculture. Even when Indians bless others, they use the word “dhan-dhaanya (wealth-foodstocks).

In a diverse country like India, any decision will not always be liked by everybody. But the larger interest of the nation must be kept in mind. “Are we a feudalistic society that a government should only “give” something when the people “ask” for it?

“Reformers like Raja Ram Mohun Roy and BR Ambedkar went against the tide to reform the society,” PM Modi said.

Modi then took a dig at those who had petitioned the Supreme Court against the Aadhaar: After all, it was only due to trinity of Jan Dhan-Aadhaar-Mobile that direct transfers amounting to a total of Rs 2 lakh crore could be sent to the vulnerable sections of the population during the lockdown phase.

He mentioned India’s fight against Covid-19, a new world order that has emerged in its wake and stressed that in such a situation, India can not be a mere spectator, like it was in the order that came up after the World Wars. To be a player in this new order, India needs the Atmanirbhar Bharat Abhiyan.

He said India has been saved in Covid-19 due to the discipline of 130 crore Indians. When the British left India, they would say India is a subcontinent of many nations and could never survive as a single one.

Yet India has survived and that is something to be proud of, he said.