Modi tears into fear-mongers: ‘These are same people who cheated farmers for years together’ 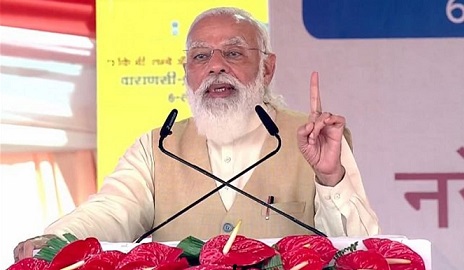 Prime Minister Narendra Modi sought to assuage the farmers protesting against the agrarian reform laws his government passed some time ago. Modi said these laws provided new opportunities and legal rights to farmers. He also accused opposition parties of fear mongering and misleading the farmers regarding these laws.

He was speaking in Varanasi after inaugurating the road widening project of NH-19. He alleged that the earlier governments had cheated the farmers promising them different schemes but failing to implement them. Compared to this, the government led by him has enhanced the Minimum Support Price (MSP), strengthened the system of mandis and ensured easy availability of urea.

Modi asserted that his government was sincere towards the farmers and always trying to address all their concerns. “Due to the new agrarian laws, farmers have been given new opportunities and legal protection. Earlier, transactions taking place outside the mandis were considered illegal. On many occasions, small farmers would be cheated. There would be disputes as the small farmer couldn’t reach the mandi. Now even the small farmer can take legal action regarding transaction happening outside this mandi,” Modi said.

“In the recent period, the country is witnessing a new trend. Earlier, if someone didn’t like the government’s decision, then it would be opposed. Now, this opposition is not issue-based. Now the opposition is based on fearmongering.”

“In the case of the historic agrarian reforms, the same act is unfolding. We have to remember that these are the same people who have cheated the farmers for years together. While MSP used to be announced, very little procurement was based on MSP. In the name of farmers, big farm loan waiver packages used to be announced. But the benefits never reached the small farmers.”

“If the farmers are apprehensive of the government’s actions, it is because of the decades-long deceit. It has become a habit for those who broke promises and indulged in cheating to spread lies. But if you look at this government’s track record, the truth will become clear. We said that we will stop the black marketing of urea. In the last six years, we have ensured that there is no shortage of urea.”

“We had promised to give 1.5 times MSP as per the Swaminathan Commission. We fulfilled this promise and ensured that the money reached the farmers’ bank account. In the last five years of the previous government, pulses worth only Rs 650 crores were purchased from the farmers. However, we bought pulses worth nearly Rs 50,000 crore on MSP.”

“One state which talks a lot about farmers did not allow the implementation of the PM Kisan Samman Nidhi. Because they thought that their politics will be finished if the money reaches farmers and they praise Modi. They did not allow money to reach the farmers. When our government is formed there, I will ensure that the farmers get this money.”