‘Modi to Mamata on Varanasi challenge: ‘But you’d find so many choti-walas there!’ 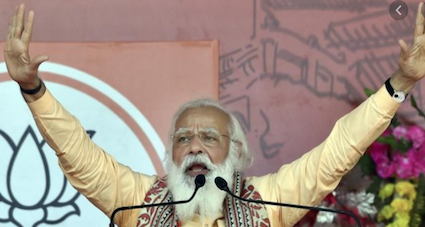 It seems every time Mamata Banerjee challenges Narendra Modi, the prime minister appears more than a match to her.

It was recently claimed on Trinamool Congress’ twitter handle that the West Bengal chief minister could be contesting from Varanasi in 2024.

Modi came prepared with his riposte while addressing a public rally in 24 South Parganas: “Didi’s party says she would contest from Varanasi, which makes two things clear—that she has accepted her defeat in Bengal and that Didi has started a search for her space outside Bengal.”

Further, Modi said: “People of Varanasi are as kind-hearted as the people of Bengal. But you (Mamata Banerjee) will meet so many people with vermillion and ‘choti’. Jai Shri Ram’ slogan irritates you, but you will have to hear ‘Har Har Mahadev’ every 2 minutes. What will you do then?” he asked.

In a different rally, PM Modi slammed Mamata Banerjee on her jibe of “outsiders” (Bohirgato) and said it’s an insult to the inclusive ideology of Netaji Subhas Chandra Bose and principles of the Indian Constitution.

Asserting that Bengal’s “Bhumiputra” (son of the soil) will take over as the chief Minister after the BJP is voted to power on May 2, Modi said no Indian is an “outsider” in the state.

“When the British tried to divide us, Netaji Subhas Chandra Bose said – India is one, and the hopes and aspirations of every Indian are the same. Today, there is a lot of pain when instead of propagating the ideology of Netaji, TMC and Mamata Didi are talking about Bohirgato,” he told an election rally at Sonarpur in South 24 Parganas district.

“Didi is talking about outsiders. We are all children of Mother India. No Indian is an outsider here. When BJP forms the government after May 2, a son of the soil will become the chief minister,” he said.

Earlier, in a rally in Tarkeshwar, Modi said, “It’s khela sesh (game over) if players keep criticising umpires”, alluding to the Trinamool’s repeated criticism of the Election Commission.

“Didi says people take money to attend BJP rallies. Didi, Bengalis are self-respecting people. Didi, you have insulted the people of Bengal with this statement. Did anyone come here today for money?” PM Modi said in Hooghly today.

“A major reason for Didi’s bewilderment is her report card of 10 years. Old industries have been shut down. Possibilities of new industries, new investment, new business and employment have also been closed down,” the prime minister said.

Meanwhile Mamta, still in her wheelchair despite recent embarrassing videos, repeated the “outsider” charge on BJP.

“BJP wants to divide Bengal… These people want to end Bengal, its language, its culture,” Banerjee said. “I request to all the minority brothers and sisters not to allow their vote division,” she said.

The third phase of Bengal’s election is on April 6.

PM wins hearts in Assam; stirs youth with a message

Earlier, the prime minister won hearts in a rally in Assam on Saturday and his words would have stirred Assam’s youth no ends up.

Midway through his rally in Tamulpur in Baksa district, Modi halted his speech and drew everyone’s attention to a BJP worker who had fainted in sweltering heat. PM asked his medical team to take care of the worker and provide him with water.

“The PMO medical team who has come along with me, please go and see the worker who is facing issues due to dehydration. Please help him immediately and provide him with water, the doctors who have come with me,” said PM.

Prime Minister’s medical team comprises experts–that includes a paramedic, a personal physician, a surgeon and a critical care specialist. This four-member team travels everywhere with the PM and are equipped with multiple ranges of medical products to deal with any sort of medical emergencies.

Modi then appealed to young voters of Assam with telling words

“I have a special request to the young comrades who are going to cast their vote for the first time. The vote that you will cast as India celebrates its 75th year of independence will also determine how far ahead Assam will be when we celebrate 100 years of independence. There is a clear roadmap for this in the BJP’s resolution letter,” PM Modi said.

Elections for the 126-seat Assam assembly would conclude on April 6. Some 2.33 crore voters would cast their vote. Polling for the first two phases has been done on March 27 and April 1.

The results are due on May 2.